googlecfdf2a75256b68d7.html So what do you think the kinder gentler Scrooge drank?

So what do you think the kinder gentler Scrooge drank?

WWSD? (What Would Scrooge Drink?) 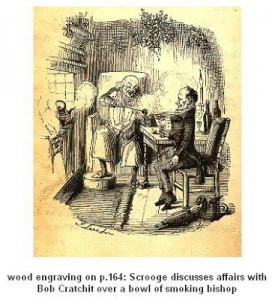 WWSD? (What Would Scrooge Drink?)

As you know, I from time to time like to write about literary and cultural references to wine. After tackling the highbrow “Fifty Shades” wine references earlier this year, and discuss the wine in James Bond movies and in “Casablanca”, I have decided to go seasonal and discuss what the kinder gentler Scrooge reached for to toast with Bob Cratchit…or to quote the passage more specifically, “…we will discuss your affairs this very afternoon, over a Christmas bowl of Smoking Bishop, Bob!”

No this is not some early Cheech and Chong or even Monty Python predecessor. In the book “Drinking With Dickens” (note to anyone reading…I would consider it a most lovely and thoughtful gift to receive it), Charles Dickens’ great grandson, Cedric (not Cedric “Cornbread” Dickens, for all you hoops historians) writes that Smoking Bishop was a very popular Victorian era mulled wine…think warm sangria. The Brits at that time had some fun naming things, like libations, and many had clerical influenced names. Smoking Bishop had a base of port. Smoking Cardinal had a Champagne base. If you want to know what was held in higher esteem, consider that Bordeaux (claret) was the base for the Smoking Archbishop, but Burgundy was the base for Smoking Pope. Smoking Beadle (the lowest on the rung laymen) did not have a base of white zinfandel, which as far as I know, my ancestors were not poking fun of a century and a half ago, but used ginger wine.

So here is basically how the drink was made (and how Scrooge was able to whip this up after his night of flashbacks and craziness and all is very impressive). The basic recipe involves roasting Seville oranges (other citrus can be used) until they brown, studding them with cloves (I’ve seen other spices included too, such as star anise and cinnamon), letting that all steep in red wine, juicing the fruit into the wine, getting it all in a saucepan with a bottle of port, bringing it to a boil, then toasting the holiday or youye grateful future without having to spend another night with wretched ghosts. Recipes vary, and I may try to play around and make this during Christmas week, but just as you don’t use Cliquot to make Mimosas, don’t use that vintage Port you’ve got laying around if you try to make this.

Oh and one of the points of writing this was to show that it was wine that the post-humbug Scrooge turned to. But as you all know, my feelings about wine focus on the enjoyment, the personal and social aspects of it, so I will leave you with those two quotes from “A Christmas Carol” which seem especially timely in these days…

“You fear the world too much,’ she answered gently. ‘All your other hopes have merged into the hope of being beyond the chance of its sordid reproach. I have seen your nobler aspirations fall off”…

And…“It is a fair, even-handed, noble adjustment of things, that while there is infection in disease and sorrow, there is nothing in the world so irresistibly contagious as laughter and good humour.”

Merry Christmas…wishing you all the joys and wonders of the season and good cheer.