or, What I Drank and Ate on My Winter Vacation 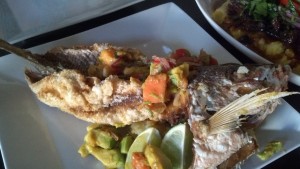 I recently traveled to Puerto Rico, very much living up to its tag as “La Isla de Encanto”, but to me it is now officially my Foodie/Thirst State.

Some of the best restaurants on Puerto Rico are American, Asian, French, Italian, but I was in Puerto Rico, so I sought out Puerto Rican fare as well as Spanish, because it didn’t take long for me to see Puerto Rican fare is very much influenced by Spain, as are the wine lists.  To me, a sign of a really good food experience is when you can not just remember the dishes you had, but can still taste them. I think that would apply to a number of things I had in Puerto Rico.

The first stop was Pikayo, star chef Wilo Benet’s flagship restaurant in the Conrad Hotel in Condado.  I opted for the $65 five course tasting menu with wines paired for another $25. The service was excellent (as it was everywhere we ate and/or drank). I asked to speak to the sommelier shortly after arriving, because I wanted to discuss pairing principles with Puerto Rican food.  It was a fortuitous request because the sommelier, Javier Rodriguez, could be “mi hermano vino”…he is knowledgeable, passionate, engaging and engaged in the subject of wine, and seeing him light up when discussing wine amused the staff, because I am could tell they’ve seen his enthusiasm before.

Typically, beer and cocktails would be paired with Puerto Rican food, but I of course wondered about wine.  To me, the challenges are in the prominence of salt, garlic, spice, frying, richly flavored sauces like sofrito.  It was no wonder I saw a lot of sparkling wines on lists.  Also based on the influences, a lot of wines come from Spain and South America.  I wasn’t surprised to not see a lot of representation from California.  To me, high alcohol, lots of oak and tannin, just don’t work with a lot of food, and certainly not the food I had in Puerto Rico.  Lists seemed to have the obligatory CA chardonnay by the glass, but we certainly had a very good one at Pikayo that was really well paired with scallop ravioli in a white wine buerre blanc, but as one restaurant owner said, “too much vanilla, too much butter” in most of them.  I agree.  And where I thought Id see more sauvignon blancs, because of the Spanish influence I saw (happily) albarinos and godellos as excellent and perhaps better alternatives.

So Javier deftly led us through our multiple courses and wine pairings. First of all, there were two menus, a general tasting menu and a Nuevo-Puerto Rican tasting menu, both five courses and both priced very reasonably at $65.  Wine pairing with every course was an even more reasonable $25.  I tasted some of both menus (and admittedly, all the wines used for pairing).  There were no misses on the menu but there were definitely some that fall into “can still taste it” category.  I skipped boiled corned beef this St. Patrick’s Day after tasting the corned beef brisket “pionono”, a small pile of roasted meat atop a fried sweet plantain with a silky, tangy sofrito.  The bacalao with apio puree, scallop ravioli, tuna tartare with jalapeno in a cold yuzu misto broth, I can keep going with the list. Javier came over regularly to enthusiastically discuss the food and the pairing principles behind every dish…the rest of the staff was excellent, and amused by Javier’s passionate conversation.  As one waiter said, “you got him talking about what he loves”.

Wrapping up the meal was a savory cheese soufflé with a guava sauce, paired with a malbec “port” from Argentina.  I wanted a do-over, but couldn’t argue when we were treated to a rich chocolate soufflé and a glass of Penfold’s “Grandfather” rare tawny. I also couldn’t argue because Javier said he would get me the recipe for the cheese soufflé.

The bar was raised high choosing Pikayo on our first night.  The New York Times had recently done a “36 Hours in San Juan” piece and I was going to try a couple of their recommendations but I decided to trust Javier over the Times. I asked him where else I could find a passion and quality for food AND wine similar to Pikayo. He sent us to Jose Enrique and Bodegas Compostela.

Jose Enrique is named after the talented chef/owner, who recently was named a semi-finalist for Best Chef in the South by the James Beard Foundation…and yes, Puerto Rico is very south…and yes, his food is like him…casual but confident and creative.  The restaurant is in an old house in the working class neighborhood of Santurce, adjacent to the lively La Placita marketplace.  This is not fine dining, but its excellent dining nonetheless. The splash of color doesn’t come from the décor (the vivid painting stand out even more) but from the clientele and what’s on the plate…oh, and the house made hot sauce, an almost but not quite Day-glo orange concoction made from local peppers and pineapple.  Even the menus and wine list are as basic as it gets…menus are written on whiteboards and the winelist is a series of hand-written sheets of paper slipped into clear plastic held together on a clipboard.

Who cares? If you judge this book by its cover, you’ll miss out on a modern classic.  And that’s what the food is…modern interpretations of classic Puerto Rican dishes, using fresh and local ingredients wherever possible.  The wine list…really really good.  Again, I saw more sparkling wines, more Spanish and South American wines, and not a lot of the typical Californians.  What I did see on this list, also at Pikayo, were Oregon pinots, that style that falls somewhere between Burgundy and California, and works nicely here.

Jose’s thoughts on wine? I commented about the really nice sparkling wine and champagne selection…he said that was because it was what he liked to drink…but I added that it didn’t hurt that it well-complemented his food.  I asked him what white he really liked lately and he said godello, the Spanish grape native to the Rias Baixas area…and I couldn’t argue with the quality of the wine and how it paired with the food.  We talked about pricing…his mark-up is significantly less than one would find around where I am (New York metro area).  He also had a tempranillo from Ribera del Duero, Antidoto, by the glass for $9.  I said that’s a great by the glass wine…and he said its not a great wine…but its consistently rated around 90 points and retails for high teens to low 20s, so when I see it on a wine list by the glass for $9, it’s a great “by the glass” wine, when many restaurants pluck their by the glass choices from the budget tables at the wholesaler portfolio tastings.

By the way, I did eat at Jose Enrique…and ate really well.  The mahi mahi and eggplant empanadillas, the braised pork cheeks, the boned and fried whole red snapper with avocado and yams.  The fish fried so perfectly not a sign of oil on the plate. The meal was punctuated with the muy classic native tembleque, a coconut pudding, his version with little cinnamon pearls, about the size of Israeli couscous, that gave a nice shot of warm spice when squished in the mouth.  Here is my take on Jose Enrique overall…everyone in the room is relaxed…and happy.  The customers are happy to be there and the staff seems happy for you.  It’s a great vibe…the food and wine are way up there too.

Around this time, I noticed that the official seals of Puerto Rico all had a lamb on it.  Meaning no disrespect, because I believe the lamb in this case has religious significance, but they ought to have a pig, because pork really is so prominent in the island’s cuisine. I unfortunately did not get a chance to travel to the Luquillo Beach food kiosks or ride down La Ruta de Lechon, or the Pork Highway, the strip of highway near the Carite Forest where local chefs slow roast pigs for hours. But I nonetheless did get to taste the most sublime suckling pig I have had to date.

My last wine and dine experience was at Bodegas Compostela. It’s  fine dining establishment…it’s a tapas and wine bar…it’s a wine shop…it’s a wine import business…it’s a hang-out for some of Puerto Rico’s bigwigs…it’s a striking dining room, highlighting the design wave coming out of Spain…it’s a comfortable tucked away space.  And its all run very capably by Maximino King and the kitchen turns out remarkable food from brother Jose.  The brothers emigrated from Galicia in Spain thirty years ago, and a few years ago, started to import and distribute wine as well.  Maximino combined confidence and hospitality in the wines he had me try.  Also a fan of godello with his food, he wanted me to also try an alvarinho from Portugal with some bottle age to it. His face really lit up when he had me try a very limited production white and red Ribeiro…I was traveling my own Camino.  The alvarinho and two ribeiros are both sitting in my wine cellar now, along with a grenache blend from Catalunya.  Yes, yes, we ate, and ate incredibly well.  In addition to that best ever suckling pig, the other incredibly noteworthy dish was the octopus carpaccio, a non-traditional preparation of a traditional Galician dish with the most traditional pairing of albarino.

It was my first trip to Puerto Rico, and all I can say is that I am going back.

I did trust the NY Times in one regard — I bought my Panama hat in Old San Juan at Ole, and it looks really sharp.  Of course, since I have been back, it has snowed a few times and been unseasonably cold, so not really the time of year to sport it…There is actually a winery on Puerto Rico, Bodegas Andreu Sole.  Owned by a Spanish family, its about two hours from San Juan and their wine is only sold and served at their property. I will make time to visit there next time I am on the island…Although not a part of the main write-up, I did stop in at other eating and drinking establishments. Café Berlin was really good and reasonable in quality and price, if you are looking for a more casual spot in Old San Juan for breakfast or lunch.  The Mezzanine is a speak-easy feeling living room/bar upstairs from St. Germain restaurant with well-crafted cocktails and light food.  Feels like you’re in a cool secret when you walk up and step inside.  El Picoteo is a very good and casual tapas restaurant inside the historic, rich looking Hotel El Convento….Finally, the concierge staff and beach crew at the El San Juan were fantastic!