What Was Most Likely Served at the Last Supper 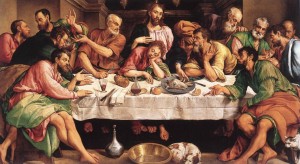 It is Holy Thursday, the day that commemorates the Last Supper Jesus shared with his disciples. There are various theories that prove and almost certainly disprove that it was a Passover seder (either happening on Passover or on the Passover preparation day), but this much is certain – the meal would have been at that time a typical communal Greco-Roman dinner with Jewish influences. Most certainly, there would have been food and wine, with guests reclining around the table, and positioned in order of importance, closest to farthest, from the host.

“Archaeology Oddyssey” is a Biblical archaeology review and in 2002, they published an article, “What Did the Apostles Drink at the Last Supper?”  The finding was that the wine served that night would most likely have been passum.  Passum was a raisin wine, made in ancient Carthage (as opposed to modern Carthage?) and transported to Italy, and it was very popular in Ancient Rome.  Grapes were left on the vine longer to dry, or laid out in baskets or mats or on straw to dry, and the raisined grapes would yield a wine of greater richness, concentration and alcohol.

Raisin wine was also frequently mentioned as a part of Jewish celebrations and in Rome, it was a wine used in cooking as well. Despite it being made from raisined grapes, and often sweet, there is no correlation between the passum of that time and Manischewitz of today.  Why the popularity of passum?  It is believed “regular” wine was not available to women for consumption, but passum was, probably because it was imported. That it was imported also gave it a certain cachet and it was used in celebrations.  It was also higher in alcohol, which gave it a longer shelf life and more bang for your buck, or denarius.

The modern Italian name for wines made in a similar style is passito, or straw wine.  The classic method dries clusters of grapes on mats of straw in the sun, but some regions dry them under cover, some hang up the grapes, and the straw may be replaced by modern racks (check out the YouTube link below from the spectacular Castello Sonnino winery and estate near Florence to see the grapes being prepared today). The technique though is the same used by the Carthaginians in making passum.

Perhaps the best known passito is Vin Santo from Tuscany. Although Amarone is made in a similar manner with the drying of grapes, but because it is a dry table wine, it does not come up in the conversation of straw wines, but Recioto della Valpolicella made from the same grape is vinified to be sweet.  Some recent research today though leans towards  the Last Supper wine being more akin to Amarone but supplemented with spices and herbs, as was also the custom that day, to either cover for lesser quality or add a new flavor twist. I suspect from all I have read that the wines still leaned towards sweet, although at the time, wines were also typically cut with water.

Vin Santo does translate to “Holy Wine” which is really only coincidental to this passito being a descendant of the likely wine of the Last Supper. There are a number of stories as to how the style of wine made famous in Renaissance-era Tuscany got its name but it may be as simple as it being a popular wine served at Mass.  Some of the other legends are worth reading about, one being that the leftover wine from Mass (leftover wine not a concept many of my friends are familiar with) was used by a priest from Siena and it had healing powers. Interestingly enough, passum was used not just in celebrations, but also for medicinal purposes, so who knows?

Vin Santo is expensive, because it is so labor intensive to make, from drying through aging, but it is a beautiful wine.  If you are lucky enough to be finishing a meal in Tuscany, as I have had the pleasure, you are likely to be offered a glass of Vin Santo and a plate of cantucci, the Tuscan version of biscotti, which is dunked in the wine before eating, not unlike how Jesus dipped bread into wine and offered it to his disciples.

Vin Santo at the Castello Sonnino…

Posted in My Words, Uncategorized