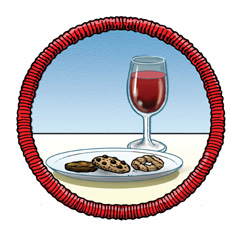 I was asked a few years back if there wasn’t anything I’d try to pair with wines, and my response was, “off the top of my head, no…but if I think of something, I’ll get back to you.” I also at that time that I was going to do a Girl Scout Cookies and wine pairing, to see what, if anything went well with those treats that are seemingly all over the place right around this time of year.

Whimsical? Perhaps.  Frivolous? Nope.  And it’s a tasting I have replicated many times over.  See that picture?  That’s the service badge I gave out to those who successfully completed the tasting task at pairing events I did last year.

Sure, on the surface, it seems a little silly, but it’s as good a foundation to discuss pairing principles as any. And sure, it’s a little fun too. I mean, what’s more fun than cookies? Before answering that, think if your response is one that you would wish to see posted for everyone to see or if it’s best sending to me privately.

No, I did not use milk as the benchmark beverage…it is actually not the perfect drink to go with all cookies, but it surely is the most traditional and classic. But this isn’t about traditional, and although there are some classic wine and food pairings, and specifically, some classic wine and cookie pairings, there is nothing classic about Girl Scout cookies and wine…at least not yet. So here goes, and by the way, I do not think the Girl Scouts any time soon should move from their prized spots in front of banks and post offices to stand in front of the local wine stores in their communities.

First, I didn’t include the chocolate chip cookies which evidently are sugar free, which sort of defeats the purpose of eating cookies, doesn’t it (which leads me to think of one wine and food pairing I won’t do…wine and Snackwells)? There are way better examples of that cookie out there. I also skipped the Trefoils, because like the chocolate chip cookies, there are way better shortbread options out there in the World of Cookies. But before continuing, I think a madeira would go really well with chocolate chip cookies and either a toasty sparkling wine in that style or a California-style chardonnay (one of the few instances where I think it’s a good food wine).

My initial pairing started out very informally. We had some friends over before heading out to dinner, and since we had a fire going in the den and to fill in some time before walking two minutes to Arturo’s, my favorite and very locaI Piemonte-style osteria, I opened a bottle of Roederer Estate Brut from Anderson Valley. Roederer Estate makes a very good California sparkling wine. It’s a very good sparkling wine in general, but its definitely from California. The first sip gave me that steely sharp, bright fruit taste, especially the lemon zest/citrus notes. That first sip also gave me an “ah ha!” moment. I asked our guests if they wouldn’t mind taking part in a little experiment, and really, when you’re giving away good wine, who would say no? I popped into the kitchen and got a box of Lemon Chalet Cremes, the sandwich cookies with lemon creme filling. I wasnt about to ruin our appetites, but I ripped open a sleeve and gave everyone a couple of the cookies and asked them to try it with wine, which everyone liked well enough. Eureka! (that’s a very California word, dont you think?) It really worked…the “buttery” cookie combined with the bright sweet lemony creme really went well with the light yeast, high citrus peel aftertaste of the wine. In this pairing, similar tastes worked well together.

After the successful Lemon Chalet Cremes-Roederer pairing, we walked to the restaurant for an excellent meal. The owner doesn’t always have a dessert, so I asked him if he would mind me completing the Girl Scout cookies and wine pairing tasting at his restaurant. As he usually is, he was game for it (little did I know he had a bad Tagalongs habit). Since it was towards the end of the night, he was able to clear a nice sized table and I walked home and got a bunch of bottles of wine and a bunch of boxes of cookies, and laid them out, figuring out how to bring order to the proceedings, not my strongest suit. I invited some folks still in the restaurant, lined up as many glasses as we could muster, and I promenaded the Do-Si-Dos.

One principal of wine pairing is if you’re serving something sweet, you generally need a wine sweeter than the food for the wine to not be overwhelmed. One thing I had not really considered when occasionally tasting Girl Scout cookies was just how sweet they really are. I will leave the sugar content chat to the nutrition experts out there, but some of the wines I brought were up to the “sweeter” challenge, and some were not, and some worked, and some did not. For example, the Roederer Estate was not sweeter than the Lemon Chalet Cremes, but the fizz and acidity in the wine, which makes sparkling wines such great food wines to begin with, really worked well with that cookie.

Do-Si-Dos are peanut butter sandwich cookies without the cute peanut shape like Nutter Butters. They are peanut buttery, and somewhat salty, but also very sweet. Peanut butter is already a challenge for wine pairing between the creamy consistency that coats the tongue and the peanut taste itself, which can overwhelm other tastes. I looked at my arsenal of wines that I pre-selected. The first was a Vin Santo, a traditional Tuscan dessert wine. Vin Santo tends to be an excellent wine to have with cookies with nuts, especially hazelnuts. In fact, it is very traditionally enjoyed as “cantucci e vin santo”, or a glass of Vin Santo served with almond or hazelnut biscotti, where the cookie is actually dunked into the wine to flavor and soften it. The Vin Santo is a sweet wine, but not as intensely sweet as some of the others, and although it went nicely with the Do-Si-Dos, there were better matches to come.

I next opened an oloroso sherry. I love sherries, dry or sweet, and an oloroso can either be dry or sweet. It has a nutty characteristic in either form, and is the base for many of the sweet sherries that are produced. There is an expression in Spain that they save the dry sherries for themselves and export the sweet ones. There is some truth in that as dry sherries are the wine of choice in tapas bars, going so well with many difficult on wine foods, but they drink the sweeter sherries too. The style of oloroso (Spanish for “scented”) that I chose was an East India solera sherry, which is aged in hot, humid cellars to approximate the effect of tropical weather on casks stored on board ships being sent across the world. Sweet, dense, nutty, chewy, tongue coating wine at its historical finest….and, a nice accompaniment for the nutty AND sweet Do-Si-Dos, but still not the best. That said, the oloroso, almost port-like, will play a starring role with other cookies.

I next opened a Brachetto d’Acqui. Acqui is in Piemonte, not far from Asti, and it is a red, low fizz, low alcohol, fun, “strawberries in a glass” wine. If you have ever had a Moscato d’Asti, the light, white fizzy dessert wine, think of this as a fuller berry blasted red version. The fizz factor is definitely less than a true sparkling wine, being frizzante in style.  This is one seriously fun wine to drink. I sometimes have it with homemade strawberry pie (and sure enough, its often served with a bowl of strawberries in Italy) and it also pairs well with chocolate.

So, I poured the brachetto to have with the Do-Si-Dos…and I immediately knew what Proust’s narrator in “Remembrances of Things Past” felt when he dunked his madeleine in his tea and waves of involuntary memory flooded over him. The co-mingling of Brachetto and Do-Si-Do in my mouth brought me back to the peanut butter and jelly sandwiches of my youth (or of the week before when I shared one with my son). Who said you cant ever go back home again?

In part 2, I will get into the best sellers which not surprisingly all seem to have chocolate in common.