googlecfdf2a75256b68d7.html Part 2 of My Girl Scout Cookie and Wine Pairing

Part 2 of My Girl Scout Cookie and Wine Pairing 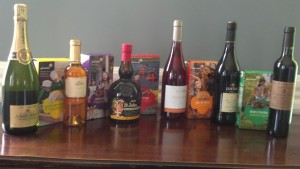 “Las cosas claras y el chocolate espeso” is a Spanish proverb that translates to “Clear things and thick chocolate”, or “let’s get things clear”. The “thick chocolate” part refers to the chocolate drink first made in Spain that was heavy or thick with cocoa. Im not so sure all my thoughts about wine pairings with Girl Scout cookies have been all that clear, but the chocolate was at least thick as the tasting moved into the highly anticipated Tagalongs/Samoas/Thin Mints portion of the program. Why do I say highly anticipated? Because last year, Tagalongs accounted for 13% of all Girl Scout cookie sales, Samoas a little under 20% and Thin Mints, the reigning champ and fan favorite, accounted for one out of every four boxes of Girl Scout cookies sold.

First up in this cookie flight was the Tagalongs, a cookie with a layer of peanut butter then covered in chocolate. First up for wine, since it was open, was the Brachetto, and the Brachetto got a thumbs up all around. Next was the sherry. I suspected the sherry would work, again, with its underlying nuttiness and the sweetness to cut through the cookie. Also, the peanut butter adds a decent amount of saltiness on the tongue, and nothing pairs better with salty, creamy blue cheeses, but sweet wines, especially anything port or port-like. And, as suspected, the oloroso sherry was a fine complement.

I did just mention port, but I did not bring a port along because of the characteristics in the oloroso sherry being similar and because of the next wine I opened. If you’re looking for a wine to go with things chocolate, the experts (and me) say you should look no further than a Banyuls. Banyuls is an area in the Languedoc-Roussillon region of France, in the Pyrenees, bordering with Spain, and the wine that bears the name is, for all intents and purposes, a baby port made from the Grenache grape…or Garnacha in Spain where it is native to.

Banyuls is harvested late, so that the grapes are ripe with sugar, which converts to a higher alcohol level. Next, in what is known as mutage, a neutral spirit is added to the wine to stop the fermentation in its tracks so that the sugar does not completely convert to alcohol. Then, in a process known as maderization, the wine is stored in casks (or in green glass bottles) and left outside to oxidize to get color and character. Banyuls is typically aged for eight years in oak before being bottled. And for all this labor intensity, you can get a good bottle for around $15. By the way, if you didn,t catch it first time around, maderization is the same process that makes Madiera wines, Portugal’s other great sweet wines and a wine that most likely could be interchanged with the sherry and the Banyuls in this tasting.

Next up were the Samoas, vanilla cookies with a caramel, toasted coconut and chocolate striping mash-up of a topping. They are incredibly sweet, which is’nt a complaint in general, but definitely a wine pairing challenge. The Brachetto did not hold up all that well under that magnification. The Banyuls was an OK, but the best dance partner that came out that night for the Samoas was the sherry, baby.

The final cookie in the chocolate troika was the Thin Mint. All the wines opened so far were relatively sweet or off-dry, but I took a stab at a “regular” wine to try with the Thin Mints. Some California cabernets have definite mint/eucalyptus undertones, especially outside of Napa, it seems. So I chose a cabernet from up north, made in the shadows of the Sierra Nevadas. Cooler climate, not quite as jammy and baked, a little less alcohol (relatively speaking for a CA wine). The wine had that herbaceousness on the nose, and even at first sip, but the mint in the cookie was way too overwhelming and the cookie too sweet. The wine wasn’t blown away on the first taste, but rather, on the aftertaste, or finish of the cookie, the mint and sweetness lingering too long afterwards. It didn’t suck, it just didn’t hold up though. Maybe a jammier cabernet would have worked better…we’ll see next time, but we still had to come up with a suitable wine. The sherry came into the line-up as an excellent substitute, but it was the Banyuls that was the leading scorer and had the longer linger on the finish to not get lost in the mint aftertaste.

Someone once said, “giving chocolate to others is an intimate form of communication, a sharing of deep, dark secrets”. At this point, having shared plenty of intimate communication with the tasting panel, we were pretty sated, so I packed up the wines and cookies (except for the Tagalongs that disappeared with the chef) and headed for home.

By the way, Im not finished. Did you really think I was? See, I forgot one of the newer entries into the Girl Scout cookie roster, the Dulce de Leche cookies, and, in all that post tasting excitement, I thought up a couple of other possible pairings with wines I had at home. The pairings I already discussed are not the definitive final word on the subject. Something else will come along that would work just as well perhaps, or down the road, as tastes change, something I liked today might not pique me later. The Lemon Chalet-Roederer Estate pairing came to me as I was drinking the wine. The wines I brought along to the restaurant were hunches, pretty good hunches, but hunches nonetheless. And after the fact, you always think of something else that might have worked. And I certainly did, almost immediately after the fact, and it was sitting right there open on my kitchen counter, where there is always a bottle or three in some state between full and empty.

Many of you have had tawny ports. I mentioned that a port would have been a good wine to go with for some of these cookies, as would have a Madeira, but the taste profile was sort of covered by triangulating the sherry, the Banyuls and the Vin Santo. Some of you may even have had a white port, which can be dry or off-dry, or a little sweeter than off-dry, akin to the drier sherry styles. But I am going to venture a guess that most of you have not had a white tawny port, because in all the wine shopping I’ve done, professionally and personally, I’ve only seen two of them on the shelves ever, one a sublime 30 Year White Tawny that I have referred to as Liquid Gold or the Great White Tawny (made one time only by a Portuguese producer and retailing around $80 a bottle if you can find it) and a 10 Year White Tawny that I discovered kicking around the wine shops on Ferry St. in Newark, for a much more reasonable, very nice quality to price ratio of $18, and, serendipitously, open on my kitchen counter when I got home that night.

So, I went to the open boxes, and whipped out a Do-Si-Do (there’s a phrase you don’t hear all the time). I took a sip of the white tawny and whoa…it really worked well! I then wrestled for a Samoa…again, success! In fact, it may have been the best wine for the Somoas overall. I then ran down to the “other” refrigerator, my “secret place” where I keep wines, and beers, and assorted other not as important beverages. I had a recently opened bottle of Muscat Beaumes de Venise, a white version of a muscat, as opposed to the tawnier styles, or the orange muscat, one of my all-time favorite chocolate pairers, or the Moscato d’Asti. Sweet, but definitely acidic, citrusy but floral, it went well with the Lemon Chalets.

Finally, I went to the last box of cookies to be road tested, the Dulce de Leche. These cookies rivaled the Samoas in sweetness, even without all that good sticky stuff coating them. The Vin Santo was pretty good with these, although Vin Santo’s rightful place is with biscotti. The sherry and white tawny though went very well with those, perhaps the white tawny best.

By the way, I’m not a wine snob, or a wine only guy, by any stretch. I still had one last thing to pour…bourbon. Just a few sips, OK, maybe a few more than a few…and the bourbon also was a really nice accompaniment with the Samoas and the Dulce de Leche. I’m seeing a potential Kentucky Derby Day bourbon/Girl Scout cookie tasting in the future.

Finally, I poured myself a glass of water, my journey ended for the night. But, I am already making notes for the next trip. I’ll choose a darker muscat, and maybe a Prosecco or a lemony Moscato, and I’ll try a Madeira in the mix, and a port or two. I will keep searching for the mintiest Cabernet I can find.

My daughter has never been a Girl Scout but we are happy to support an organization, any organization, that has a positive impact on the lives of girls. The GSA has gotten a lot of heat lately from some who say the cookie sale is antithetical to the healthy living initiative of the organization. The Girl Scouts have replied by saying the cookies are a treat which shouldn’t be a main part of somebody’s diet. I agree. Eating and drinking, whether separately or as pairings of any sort, should be enjoyed. I enjoyed this cookie and wine pairing, from start to finish, and I am guessing I will enjoy it when I do it again (and I will do it again). To me, eating and drinking is not simply sustenance, it is sociable, it is enjoyable, it is informative. Moderation is much more realistic and achievable than abstinence, and a lot more fun. So enjoy your cookies, and enjoy your wine, separately or paired. I hope you enjoyed reading this too, and appreciate that you took the time to get this far. Stick around with me if you like. I enjoy the company.