googlecfdf2a75256b68d7.html A Civil Rights Leader, A Segregationist and a Liberal Journalist Walk Into a Wine Shop...

A Civil Rights Leader, A Segregationist and a Liberal Journalist Walk Into a Wine Shop...

it's not a joke, but a Dr. King wine story 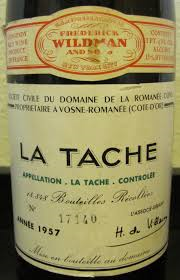 A civil rights leader, a liberal journalist and a segregationist governor walk into a wine shop…nope, it’s not the opening line of a joke but a true wine story involving Dr. Martin Luther King, Jr.

Dr. King was certainly not a wine snob, but he did have an above average appreciation at that time for it.  As a student in Boston, a friend who was collector of fine wines would often share it with Dr. King.  Dr. King also had an affinity for pecan pie, his favorite food, and on the night of his wedding anniversary in 1961, he went to the establishment of Jim Sanders, the foremost wine importer in the South at the time.  He was looking for a sherry to go with the pecan pie (although Sanders noticed he was wistfully looking at the Burgundies) and he walked into the middle of Sanders drinking rose with the already coincidental grouping of segregationist and former governor Marvin Griffin and one of his biggest critics, liberal publisher Ralph McGill (you never know who is standing next to you in a wine shop).  Rev. King was invited to join them (all real men drinking rose) and although the conversation was not warm and fuzzy, it was described as civil, which taking into the account the times and those assembled, is truly remarkable (or sadly, might be considered remarkable today).

The ensuing conversation turned towards wine, and Sanders gave a sample of how three wines with the same name, in this case Sauternes, could be so very different, starting with a jug wine, moving to another from Ohio and then the real deal from Bordeaux. (This was prior to protectionist laws that prevented wines being called names that had nothing to do with their place of origin, like the Paul Masson Burgundy some of you may have sampled in the 1970s.)  Dr. King referred to the real Sauternes as similar to “the best cantaloupe you’ve ever tasted compared to damp pasteboard.”

The story, with a link included below, is narrated by Doc Lawrence, a well-known Atlanta based food and wine journalist. He was given the typed story from Jim Sanders himself in 1999 ahead of Sanders’ death.  How does the story end?  Dr. King had been longingly looking at perhaps the finest wine in the world, a 1957 La Tache from Burgundy (the real Burgundy) when he first walked in. Sanders remembers and opens a bottle and pours some for the three unlikely drinking partners, and in this amazing wine, arguably one of the world’s finest, they really find a common ground.

I often speak of wine as something social, something personal, something connective. I love the history of wine and how wine appears in history. I often say everyone has at least one wine story. Jim Sanders has one of the more incredible wine stories I have ever heard and he asked Doc Lawrence to share it, and Lawrence has asked everyone to share it as well.  In my belief in “pouring it forward”, I share this story with you. If people so ideologically opposed over fifty years ago could put differences aside even for a short while when it was expected to not do so, it shouldn’t be nearly as difficult today.  I am reminded of one of Dr. King’s famous sermons, and maybe it makes some sense because the sermon was delivered on a Sunday in early 1962, not long after this story.

In the Gospel according to Matthew, Jesus says, ““Neither do men put new wine into old bottles else the bottles break, and the wine runneth out and the bottles perish but they put new wine into new bottles, and both are preserved.”  Wine was stored in clay vessels and they were porous and fragile so when it came time to store new, fresh flowing wine, old bottles, or vessels would not be used because they were more fragile and not ideal to hold the new wine.  It was a parable that Dr. King applied to himself as he wondered if the country was ready for new, fresh flowing ideas, if people were capable of holding onto them, or would they break because their intellectual and moral framework was not new or adaptable, thus allowing the new way of thinking to flow out in ruin rather than be retained.  One can hope today, over fifty years after this story, there are more and stronger bottles than ever before, but unfortunately, it seems we still need more and stronger bottles.

And here is the youtube link with a narrative of the story.  Thank you Doc Lawrence and Jim Sanders.  http://www.youtube.com/watch?v=kPSAYldA5qM