googlecfdf2a75256b68d7.html My mother's influence on my interest in wine

My mother's influence on my interest in wine

and she didn't even drink 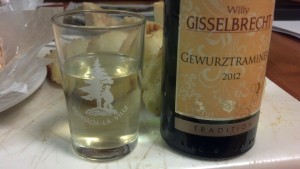 I originally updated this piece for Mother’s Day three years ago. My mother wasn’t in great health and was having memory issues too. I told her I had written this piece about her influence on my current line of work and one of my passions. Never having been on the internet herself, she was still flattered…and that made me happy. It was all bittersweet to have re-written it and shared it with her because she died five days later on what will always be one of the absolutely saddest days of my life.

I am participating in a storytelling workshop so I revisited this recently, although the story itself isn’t just emblazoned in my mind but in my soul. I first wrote it in a feeling of nostalgia after my mother’s last living sibling died. My mother’s father was from Alsace Lorraine. He was a kind and quiet man but also an alcoholic, and I grew up watching my mother care for him as his health deteriorated. She undoubtedly had mixed feelings anytime I worked with alcohol, I am sure…and I suppose in part because of that, I learned to have great respect for what bad it could do and greater emphasized the good side of it.

My mother kept in occasional contact in the old traditional manner with her Alsatian family after my grandfather died, through letters. She never would have visited as she was unable to travel, but in my early 20’s, my mother arranged and paid for a trip to one of the four homelands of my heritage for me and my brother. We spent a week in my grandfather’s home village of Dambach-la-Ville, a place that truly deserved to be described as picturesque. We stayed with family and saw local treasures, and ate and drank local treasures. This was my first real exposure to being a locavore and locabibe long before it was trendy. One cousin, a waiter at the famed Auberge d’Lill, took us to eat not only marvelous choucroute garni and tarte flambé but for early morning barrel tastings at Hugel and Trimbach. Although I grew up with wine on the nightly dinner table and went to college in the Finger Lakes where I first visited wineries and studied wine (OK, took wine classes), it was this trip that planted my first real vines of interest and curiosity…and love for wine.

There are numerous wine region specific trade groups these days and one day, I corresponded with the really great folks at Wines of Alsace USA. They sent me some wonderful wines, but also some swag including a map. I looked at the places along the Route du Vin and saw many of the towns I visited on my trip many years back, including Dambach-la-Ville. I wrote to Wines of Alsace and asked about the town and surprisingly (and proudly) learned it is the largest wine producing village in the famed region. They gave me contact info for Willy Gisselbrecht, one of Dambach’s fine producers.

I wrote to the winery before going to bed introducing myself not only professionally but as the grandson of Charles Matt, and when I awoke the next morning, I had an email reply from Claude Gisselbrecht. The Matt family he said was a prominent name in the village and he remembered as a child buying candy from a one armed shop owner, Camille Matt. I asked my mother if she had a one armed uncle. Her memory wassn’t great any longer but she had vivid recall of much of the past, and sure enough, her father had a brother who lost an arm during the war (although I am not sure which war it was). I next found the importer for Gisselbrecht wines, which aren’t widely available, and not too long ago located a bottle of the Gisselbrecht gewurztraminer.

Gewurz takes some getting used to. It is floral and aromatic and when not grown in a cooler climate, I find those notes can get exaggerated and overblown. But, it is also a great wine to go with well seasoned and spiced foods and also very versatile with a range of cheeses. Wanting to give it it’s proper showing, I also went out and found a small wheel of Alsatian muenster cheese, pulled out my lone existing Dambach-la-Ville glass and set about to pay small tribute to my heritage. 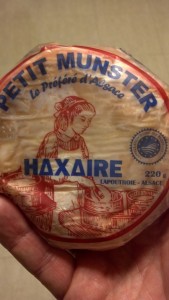 I opened the wheel of funky orange rinded cheese, and immediately was transported back to my trip where family members with pride and pleasure kept encouraging us to “try our local wine!” (or cheese or whatever it was being put in front of us), the locavore/locabibe movement not being something trendy or gimmicky, but simply, a wonderful way of life. The Gisselbrecht gewurz by the way was a beautifully balanced version, with a great mouthfeel and a brightness that I could see clearly, even through a few tears. I often write about how wine is connective and transportive and personal…and here not only was I experiencing that, but reminiscing about that as well.

I need to try more wines from Dambach. I not only like how they taste, I like how they make me feel, I like that they make me feel. I need to travel back to Alsace too someday, having gained a greater appreciation over the years for what I first experienced there over thirty years ago, and what has stayed with me and influenced me along my own personal wine route. My mother wanted us to see her father’s homeland and meet her family and live it vicariously through us because it was a trip she could never make, but in her manner of parenting, it was more important for her children to go. I always had the sense that she never did quite understand how or that I live that connection and influence daily, but it was in large part because of her wish and her planning out that one trip itself for my brother and me.

My mother also taught me it was OK to be emotional and to show my emotions. I am not quite sure she would ever have expected that I would be emotional about wine and my wine related experiences. I am forever grateful for her and to her, and it has nothing at all to do with wine as I have lived a life unafraid to share emotions and allow my emotions their place in how I go about my day every day.

Three years ago this week, right after Mother’s Day, my mother died, both unexpectedly and expectedly. I had exchanged some conversation with the trade group folks again prior to that week and they were going to send me more wine. The day we buried my mother, my brother and his family and my family came back to my house to be together and have a meal together. The doorbell rang, a delivery. I opened the box and it was wines from Dambach la Ville. Maybe my mother did understand. After all, that’s what mothers do.