googlecfdf2a75256b68d7.html The Anatomy of…no…The Crafting of…no, not that either…The Fun of Wine Pairing.

The Anatomy of…no…The Crafting of…no, not that either…The Fun of Wine Pairing.

it's not really art or science 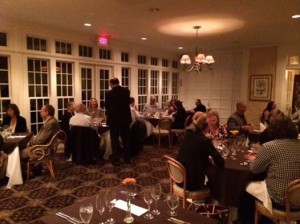 Let’s face it, some treat is a science, others as an art form, but ultimately, it should just be about having fun trying to maximize the taste of really good food and wine together with one other important component usually present – really good company. It’s a good example of the sum of the parts being greater than the whole when it all comes together. I was asked to put together a wine pairing dinner on pretty short notice by The Club at Orange Lawn. They have a relatively new executive chef, Richard Krug, who has spent time in some really good kitchens in New Jersey and with an open Saturday night on the calendar, decided to offer something new to members…and it sounded so good, they opened it up to the public too.

I asked the club to give me a menu first, rather than give a list of wines available, and then sat with Charlie Woods of Bonhomie Wine Imports, a boutique operation specializing in artisanally produced, small batch production, to find out what wines he had available. Making the pairing even more interesting was that the menu was Italian, really Northern Italian, which played nicely into the focus of Bonhomie’s Italian portfolio. Charlie and I sat down with just the printed menu for the night and he started opening wines he thought might work with the different courses and the pre-dinner reception period. We opened a bunch of bottles, and started tasting and talking it over and yes, I know, my work is tough. So what follows is a summary of the pairing discussion, the actual pairings and how it was received.

First Course: Roasted Beet Salad – shaved fennel, gorgonzola, guanciale, arugula, extra virgin olive oil, orange infused aioli. Paired with Il Poggio di Gavi, Gavi, Piemonte, Italy, 2013. Charlie has a really nice Prosecco in his portfolio…extra dry and spumante in style, but definitely leaning towards brut and not demi-sec like so many seem to be. A quick stop to explain these terms to the uninitiated…in sarkling wine parlance, brut is dry, extra dry is off-dry (touch of sweetness) and demi-sec is somewhat sweet. Most Champagne you drink is brut. Spumante means full fizz as opposed to frizzante which is a lighter fizz. Spumante style Prosecco has the traditional thick cork and wire basket on top…frizzante has a screw cap or cork you use an opener to pry out.

As much as we thought the Prosecco would go great with the components in this dish, we wanted to use it for the reception time slot (along with a really nice Nebbiolo). So we decided on this Gavi, which because it comes from within the boundaries of Gavi itself, could be classified as Gavi di Gavi, so you are getting a better defined wine than it says on the label for the buck. What impressed me most about this wine was the really good length of the finish. To me it gave this clean acidic wine a richness as well, and the dish had a bunh of flavors. It was a starter chilled dish, the beets had a touch of earthiness and sweetness, the cheese and olive oil gave some creaminess, the fennel and arugula a snap and the aioli a citrus note, all well balanced and all present in the wine. The diners agreed – we were off to a really good start.

Second Course: Butternut Squash and Mushroom Risotto – crispy Brussels sprout leaves, white truffle froth. Paired with Rezzadore, Monte Oseliera” Pinot Grigio, Veneto, Italy, 2013. When I gave Chef the list of the wines, he said to me, “pinot grigio, really? It must not be a regular pinot grigio.”  Clearly, he knew…a standard issue pinot grigio would have been consumed by this dish, rather than with it. But this was a ramato. Ramato is the Italian pinot grigio version of a rosato, or rose, but since pinot grigio skins turn orange, when used in fermentation, it creates an orange or rust colored wine, ramato meaning rust in Italian. And before putting color aside, the light orange hue matched the dish in eye appeal, but the appeal of this pairing went much farther.

Charlie has a Petite Arvine in his arsenal…a grape native to Switzerland and classically paired with cheese fondue there. His is from Valle D’Aosta and is such a gorgeous wine…incredible nose, really rich feeling in the mouth, but unfortunately, a bit more expensive than we wanted to go and also in more limited supply than even most of his wines. Orange wines, or white wines aged with skin contact (grape skin contact I had to assure the room at this point in the meal), are so old they are new again. Made this way for centuries in Northern Italy and Eastern Europe, and often aged in clay amphorae that are sometimes buried in the ground, these are a wine geek’s delight. They are not easy to drink on their own, but they pair wonderfully with food. This version has some of the classic elements of an orange wine…surprising tannins (you don’t expect them in a white, but they do help with a rich dish), an almost dry sherry-like minerality and touch of oxidative flavor you find more prominently in them, fruit and nut skins, and a surprising umami taste – herb and earthy flavors. We accounted for the creaminess of the risotto, earthiness of the mushrooms, the vegetal taste of the sprouts, and sweetness of the squash, but were concerned about the truffle froth.

A number of folks at the dinner were concerned about the wine at first sip, but we wanted to open people’s palates and expose them to some different wines and pairings and the risk was rewarded. People loved this pairing (I did too).

Third Course: Pan Seared Yellowfin Tuna – escarole, white beans, dried figs, Gaeta olives, grilled octopus. Paired with Ottin, Pinot Noir, Valle D’Aoste, Italy, 2012. I pair by weight and mouthfeel, which means that “white with fish” adage doesn’t really work and at this point in time, reds with fish like salmon and tuna are not considered a stretch at all since they are more akin to meat than many light, flaky fish. I also like to consider not just the fish, but the whole dish, and in this case, it called for something more than a white. We considered some lighter reds open on the table but then I remembered Charlie had a pinot noir from Italy I had tasted once. Bingo! After tasting it together, Charlie said I was brilliant…I just thought I had a good memory. Northern Italian pinot (from the same producer as the Petite Arvine mentioned in the last pairing), it came in at 13% alcohol and was definitely more Burgundian/Old World in style, which is what I wanted.

When opened at the dinner, there was more smoke in the wine than I tasted earlier that week (which is not an unusual flavor in some pinots). The tuna that was plated, a gorgeous hunk meat largely rare with a thin seared and peppered layer, went great with the pinot, especially since it had an acidic tingle. But Chef added the octopus to the course after we came up with the pairings, the grilled meat hit the right notes, especially with the smoky element. His addition was prescient. The dish was another crowd pleaser (and Hank pleaser).

Fourth Course: Brasato – short rib, broccoli rabe, cipolini onion, demi – glace. Paired with Azienda Agricola Viviani, Valpolicella Classico Superiore Ripasso, Veneto, Italy, 2010. We knew we had a big mouth-pleasing dish here on our hands, and Charlie wanted a statement wine to match it. And this wine was truly big and mouth-pleasing. Ripasso is a newer classification of valpolicella, a wine I like to call “Baby Amarone”. Amarone is made by taking the same grapes used to make valpolicella (corvina, molinara and rondinella) and drying the grapes, often on straw mats in the sun, effectively raisining the grapes. The reason why Amarone isn’t cheap is because of the labor intensive aspect of the drying and you get more juice out of a grape than you do a raisin. The reason Amarone has a raisiny taste is because it is made from raisins. The drying of the grapes concentrates and intensifies many flavors and the Italian root of Amarone also means bitter, and you can find a bitterness in the taste too.

Ripasso means re-passed, so the must left over from the Amarone production is often combined with the basic valpolicella, or a certain percentage of the Amarone juice is combined. In this case, 40% is blended in, making it more a Toddler Amarone than a Baby Amarone. We were right by the way…the pairing did make a statement. It was the most popular of the night and provided an exclamation point to the meal.

There you have it…it all worked really well. But if you were in attendance, what really worked was that it was a night where everyone in the room was having a great time. It felt great to be in the middle of it…and that is what wine is to me. It is fun, it is social, it is connective, it is something you share with family and friends. For me, I got two fun nights out of it…the event itself, and the time shared with Charlie tasting through his wines deciding what to pair, and not just tasting, but talking and laughing about all sorts of things.