googlecfdf2a75256b68d7.html How Bugs Bunny Prompted Some Wine Research and Education

How Bugs Bunny Prompted Some Wine Research and Education 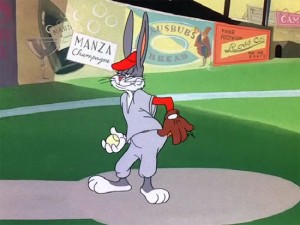 This picture references three of my favorite things…baseball, Bugs, and yes, bubbly.  Yes, bubbly…right there in the background on the fence. Yes, I am of AARP card holding age (I keep tossing the letters out though) and will admit unabashedly that I like cartoons, and Bugs Bunny is at the top, along with Rocky and Bullwinkle.  And this Bugs Bunny cartoon where the picture is taken from, although its no “What’s Opera, Doc?”, is still one of my favorites.

With the start of another baseball season, I thought of the cartoon and took a closer look at our protagonist and wise sage on the mound, and more specifically, the stadium signage in the background.  “Ross Co. Finer Footwear for the Brats” amuses me every time, but Ross was a reference to Virgil Ross, the animator, I learned from some googling.  I also looked to see what “Lausbub’s Bread” may have originated from, but found that lausbub is a German word for rascal, or mischievous person.  But what really caught my attention of course was “Manza Champagne”.

Manza to me is an Italian name, and I didn’t think there were any Italian named Champagne houses. Of course, sparkling wines have been referred to as champagne in the past, but the Champenois have been very protective (via legal channels) of their name.

The name “Champagne” was first legally protected by the Treaty of Madrid in 1891, and although not usually referenced in history books, again in the Treaty of Versailles after World War 1.  After World War 2, the folks in Champagne again stepped up the protection of their good/valuable name but here in the United States, it wasn’t until 2006 where things became more legally clear.

Unofficially, some of the higher quality sparkling wine producers in the United States never used the word Champagne, capitalized or lower cased, on their bottles, out of respect and a desire to create a distinction.  In 2006 though, the law was written that basically said “champagne” could exist on a label if it was lower case, accompanied by some geographic indicator (like “California” or “Maplewood”, for example) and if the winery was using it prior to that year.  Some still use it, like Cook’s and Korbel.  Korbel coincidentally has been served at six different White House inaugurations, which goes to show, regardless of party affiliation, sometimes with politics, there is no accounting for taste.

One side note, the village of Champagne, Switzerland has been making a still wine since the 1600s called Champagne…well, it used to be called Champagne until the EU got the Swiss government to concede to phasing out the name.  Sometimes, name protection gets not just silly, but hurtful…sales of the still wine dropped dramatically.

The cartoon classic that prompted this mental (and typed) meandering was made in 1946, which I would say constitutes post World War 2.  It is conceivable that a sparkling wine made with an Italian name, in the US or Italy or anywhere else could have been called Champagne.  I found no record of such a wine in the United States or in Champagne itself, and in 1946, they would have just been ramping up their latest round of name protectionism.  And unlike the Ross reference in the cartoon baseball field signage, I found no record of why there is a Manza Champagne ad.  I did however find Perlage “Col di Manza” Prosecco, which today is a biodynamic and vegan wine produced in the Prosecco di Valdobbiadene DOCG.   Although I suspect its not the same wine in the cartoon, I definitely have a new entry on my wine radar to try to find and to try.

One last thing before I let Bugs “paste this pathetic palooka with a powerful, paralyzing, poifect, pachydoimous, percussion pitch.”  You’ll note the old school champagne glass or coupe in the cartoon ad.  It has been said that the coupe was patterned after Helen of Troy’s breasts…and then it was said it was patterned after Marie Antoinette’s breasts.  In either case, if true, it can be said they had unusual breasts, but it is really most likely only a legend.  It was also a very inefficient glass to drink from, toast with, glide around a dance floor while holding, a la Fred and Ginger, and retain the effervescence of the wine, which is why we almost always see the champagne flute used today.

Now, back to rooting for Bugs and his unfortunately named team in the cartoon – the Tea Totallers. Beat those Gas House Gorillas!