It's Throwback Thursday of sorts, even with wine. 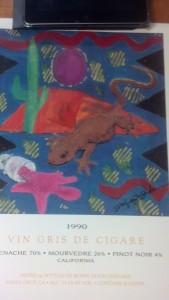 In the social media world, Thursday is Throwback Thursday, which refers to years, not alcohol consumption.  I already showed the world a picture of me with hair last week (yes “the world” because we know social media sites are incredibly interested in and using every single picture we all post for their own gain, right?).  One picture of that sort is good enough for now, so I am going to take today to throwback to an old friend of sorts, the wine that launched my interest in drinking rose a quarter century ago.

Yes, all those years ago when real men were starting to eat quiche, most still wouldn’t dream of drinking a pink wine.  Silly men, really, but a quarter century after I and many others have been extoling the virtues of pink wine, when I introduce a rose at a wine event, I still get some shudders and headshakes. Now I’m not talking the bubble gum colored, scented and flavored variety of pink wines, but the dry, crisp and versatile Provencial style.  There are more and more of them in wine stores every late spring, getting ready for summer.  They are an incredible range of shades of pink, not unlike most of us as we are getting ready for summer. I probably try at least 30-40 a year, and every year I find at least a couple or three that are my roses of the summer.

This summer though, I revisited with that old friend, the wine that grabbed my attention then.  Like many old friends, we drifted apart, but kept in touch, getting together on occasion over the years, very much like the high school and college friends I have been fortunate to reunite with more and more it seems over the past handful of years.  It seems to be reunion season, and the remarkable thing about the reunions is that you always pick up where you left off.  It always feels as if it was just yesterday you were hanging out together, like you never missed a beat.  That to me is the truest sign of friendship.

So I pulled an old friend from my wine fridge not too long ago, a Bonny Doon Vin Gris de Cigare. We instantly re-connected and the memories flooded back in.  Back then, I became a big Randall Graham fan, as much for his incredible wit and sense of humor as for the quality of his wines.  I connected with him on more than one level.  I finally met Graham face to face earlier this year, tasted through most of his current releases with him, and told him how he influenced my wine interests in my “formative wine years”.  He was gracious in the face of my emotional babbling.

Graham was one of the original Rhone Rangers, growing grapes better known for Rhone wines.  His Cigare Volant was his tribute to the Chateauneuf-du-Pape blends that I loved (and seemed to be able to afford more easily 25 years ago).  The name of that wine, which means “flying cigar” was a nod to the law passed in that French commune in the mid 1950s, banning alien spacecraft, or flying cigars, from landing in the vineyards so as not to damage the precious vines.  Life was all so “klaatu barada nikto” back then (I’ll buy a glass of wine to the first person who gets the reference).  When asked recently by a friend what would happen if an alien spacecraft actually did land in the vineyards, my research showed that offenders would have their crafts impounded.  Obviously, the law worked because no spacecraft is known to have landed and damaged the vines.

Back to my old friend.  The Bonny Doon Vin Gris de Cigare is a rose blend using many of the grapes in the Cigare Volant, but in vin gris form.  Vin gris, which means “grey wine”, really is a French phrase for rose or pink wine.  It was a phrase used long before the silly novels, not some marketing ploy like that guy who did the “Wines of Fifty Shades” event this summer.  Today, vin gris can be a phrase referring to pink wines in any number of production methods.

This vin gris, my old friend, was a reunion without expectation.  I was confident that I would find my friend to still be of great taste, bright and just acidic enough for my tastes, and although it wasn’t a long reunion, it finished strongly enough. It being a Throwback Thursday, I dug out a picture of my old friend, a poster from 1990. Funny what he was wearing back then, and how it has changed to something more classic all these years later, but I was never one to judge a friend by his cover, but by his substance.  I think I am going to have that picture framed.  It brings back a lot of great memories, and is a part of who I am today, like many other friends who have influenced my life.