I dont especially like it either, which doesn't mean you shouldn't. 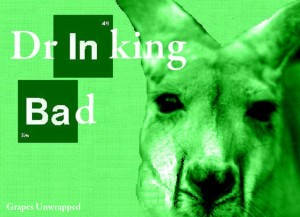 I recently had the idea to do something in conjunction with the finale of “Breaking Bad” and in the style of some of the graphics used to publicize the show.  I called it “Drinking Bad”, and when I thought of a picture to go along with it, the first thing that came to mind was a kangaroo, signifying to the wine world “Yellow Tail”.  Since then, I have been asked more than once why do I hate Yellow Tail wines.

I don’t hate Yellow Tail wines.  I don’t love Yellow Tail wines either. I want to explain my feelings, knowing that whatever I say is not likely to impact their sales figures any time soon, but I’ll feel better (and I felt like writing today and this is what came to mind).

As I have said, I like wines with stories.  I like the personal aspect of wine, not just the socially personal but the professionally personal, meeting many winemakers and winery owners (often one in the same) and hearing their stories and getting a sense of the extent and depth of their passion and how it fuels my passion.  And of course, as my friend John Coyle of T. Edward Wines says, seeing their hands.  In his never ending quest to find new wines for his company’s portfolio of artisanal wines, John says he looks at a winemaker’s hands to determine just how involved they are in the grape cultivation and wine production.  Not a bad gauge, and a wine story in the making right off the bat.

As a wine educator, I stop and consider what I taste, and not just wines, but any beverage and any food.  No, I am not insufferable about it, or ritualistic about it, but I think its actually a positive change in my life, the ability to stop and consider for a bit what I have put in my mouth (that does not include my foot).  There usually isn’t much to stop and consider in mass produced products.  I am not passionate about my Wheaties or PG Tips or Lever soap.  I like the products, but they do not fuel my passion at all.  That is why I don’t like mass produced wines.

Another thing about mass produced wines…they may be easy to spot on a shelf when one is experiencing some serious tunnel visioned retail angst, but some of them aren’t necessarily good values.  At a wine dinner last night, I did a little experiment for the dozen people in attendance.  I served two wines blind, Santa Margherita Pinot Grigio, the biggest selling imported white wine in the United States, that retails for around $20, but Ive seen it higher, against another pinot grigio at around $10.  I only identified the wines by price and grape…the year, region, alcohol percentage were all the same.  I told people that neither wine was considered bad.  Santa Margherita is not a bad wine.  Their sales will not suffer from this piece.

The results were interesting.  First, people at the dinner weren’t expecting this pop quiz, but to a person, they were all into it.  A few of the people said they were regular pinot grigio drinkers…a few said they rarely drank white wine at all.  Three of the twelve people preferred Wine #1, the rest Wine #2.  Most liked both enough.  I then asked them which wine was the more expensive one…10 out of 12 picked Wine #2.  Wine #1 was the $20 Santa Margherita,  Wine #2 was the $10 pinot grigio.  No one hated either wine.  Everyone said they would rather have two bottles of the $10 wine than one bottle of the $20, based on the tasting.  The name of the other wine?  Probably irrelevant because although it is fairly available in a lot of good wine shops, the majority of you won’t have ever heard of it, but its Tiefenbrunner.  I had two or three other similar quality and priced wines in my hand that would also have led to the same conclusions, but gave this one the nod because I like the importer a lot, another thing I look for when trying to determine the quality of a wine.  But for many, Santa Margherita is the pick because it’s easy to find, consistent and familiar.  People know the label. Label familiarity breeds contentment, just like with those kangaroos.

So don’t hate me for thinking I hate a wine you like.  And don’t have any sort of inner conflict.  Remember, this is all a matter of personal taste, and there is no wrong answer (except white zinfandel, but that’s not even a given any longer).  If Yellow Tail and other such wines satisfy you, by all means, enjoy them.  But, if you do have the time and interest to delve deeper, it’s a big wine world out there.  Explore and enjoy it.  I will continue to do so.