In Honor of International Women's Day

A Conversation with Ardic Gursel of Vinkara Winery in Turkey. Yes, Turkey. 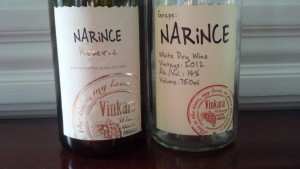 I have had the good fortune through my business to meet folks from all over the world passionate about wine. Many of them are women, maybe in higher percentages globally than many industries. I am grateful for that and not just because I like women. I think they bring a different sensibility to everything from the agricultural side to the wine making on through to the marketing and sales and other business aspects of wine. The successes of women in the industry aren’t surprising. Like most success, it is earned through intelligence, innovation and hard work. Women are no strangers to any of that and in the wine business, there have been opportunities for them to stand out.

I also like wine stories, and although I could write for the entire month about the various women I have met in the industry to honor Women’s History Month and International Women’s Day, I only have time now to focus on one, and it is a pretty compelling story to me.

Ardic Gursel owns Vinkara Winery. She opened it in 2003, starting it from scratch. She now produces about one million bottles a year and that number is growing. She has planted a number of varietals but her focus is largely on native grapes. It is impressive but nice to say that in 2014, also not a unique or unusual situation, even for a woman. What makes the story compelling though is that she has done this in a Muslim country, her native country of Turkey, and it is a business she has envisioned starting and growing since the early 1980s and throughout a successful career in hotel management.

I first heard about Ardic this past year and read that she did some coursework in the hotel school at my alma mater, Cornell. Through the magic of the internet, I searched for information about her wines and winery and was able to write to her and her importer, and heard back the next day. Since that time, it is not quite so easy to find information since the Turkish government, while not the repressive type of government some think of, has clamped down tight on marketing and advertising of alcohol products, and that includes social media. It has given me more reason to want to write about her and her winery. 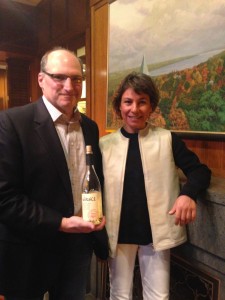 We met recently at the Cornell Club in New York City. To use basketball parlance, she plays taller than her height, and what you pick up quickly in conversation is her quiet strength and confidence (she is a very capable person, and that includes her activities of competitive sailing and other water sports), and her clear passion and enthusiasm for her wines. Ardic sees it as her mission to not just preserve the native grapes, but to make them her winemaking focus. That attitude is seen in her decision to have the grape names most prominently displayed on her labels. She is proud of this heritage and especially her native region of Erbaa in the Tokat province, northeast of the capital city Ankara and says the region has “is everything a grape needs to be a great wine”.

I had the opportunity to taste two versions of a Vinkara white wine made from Narince (pronounced “nah-rin-djeh”), one unoaked the other an oaked Reserve. Narince is native to the region where Vinkara is located. It is to Erbaa what Chardonnay is to Burgundy, and although Ardic would not make such a comparison, she holds the grape and its history in as much regard as the natives of Burgundy would with Chardonnay. Her pride is not unlike what I have encountered with Italian winemakers who have planted autochthonous grapes, with one exception…their grapes may be representative of the history of grape growing in their specific region but for Ardic, such grapes represent roots back to the origins of wine making.

I tasted and discussed the wines with Ardic and also got to take them home and spend more time tasting them along with my wife (aka “My Palate”…women are after all on average better tasters than men). I also got to try the delicious Turkish pistachio marzipan Ardic gave me…all I can say is I’ll never eat the more readily available almond marzipan again. My first impression was that these were great seafood wines, and Ardic agreed, and added that they also worked great with local vegetable dishes. I went back to some of my notes on my previous tasting of Narince and said good with sushi and raw oysters. I also tasted a cooler climate influence despite the good dose of alcohol in these two wines and sure enough, the grapes grow at 700 meters above sea level. They also are grown organically unless intervention is necessary. Again, I am reminded of her line about there being everything a grape needed to be happy.

I made a roasted lemon sole dish later that night with an array of vegetables, spices and herbs. Both wines went really well, although my personal preference was for the unoaked Narince. What impressed me about the oaked Reserve was that the brightness of the fruit came through in the finish and wasn’t overwhelmed by the oak. There was a lot of freshness still in the four year old wine, which leads me to believe these are potentially age worthy whites. I experimented a bit and tried the Reserve with a piece of aged Manchego.  The liveliness of the wine was revealed even more after the cheese and oak balanced one another out.

I am not new to tasting Turkish wines. In fact, my inaugural blog on my website was about Turkish wine, fitting because it is believed to be the birthplace of wine (http://thegrapesunwrapped.com/wp/?p=107).   After I wrote that, someone asked me if Turkish wines were any good.  I said that they have been making it for at least 6,000 years there so some producers may have it down by now.   Those who follow me regularly know I do not write or speak of anything I do not believe to be of a good quality either. You also know I like an underdog and give preference to smaller rather than large, and local and indigenous to mass produced and food processed.

Ardic did not dwell on the latest round of government restrictions that do not allow for a logo to be seen outside the winery. In fact, it doesn’t even allow for bottles to be seen displayed through windows from the winery, where promotion is restricted to. She doesn’t even see this as a challenge as much as her mission and goal…to make the best wines from native grapes. But the restrictions are a challenge which is why I want to do my small part to educate you all. I hope to tape a show with Ardic this year and a couple of tasting events are in the works for the autumn. Not only will I have tried her reds by then and reported to you on them, but the first ever sparkling wine made from native Turkish grapes and in the Champagne method should be available by then at those tastings.

Despite the steps backwards the government has taken, Vinkara under Ardic Gursel’s leadership is moving forward. So did I get her to admit that there were some challenges? “I never thought I’d say running hotels was easier than making wine,” she said.