googlecfdf2a75256b68d7.html Part 2 Of Picking The Sweet Sixteen Through Wine Analysis*

Part 2 Of Picking The Sweet Sixteen Through Wine Analysis*

*accurate wine info, but may not lead to logical basketball results 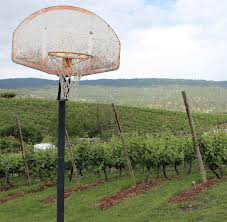 I was 1 for 4 in my Thursday games using wine as the determining factor in predicting winners in the Sweet Sixteen. Let’s see how the analysis fairs for tonight’s games.

Iowa St vs. Connecticut. This is a tough one. I have been to wineries in CT and liked them. I stop at wineries anywhere I can. I am interested in their efforts to produce something locally. But at one winery I visited, loaded with casino folks needing a break from losing, I asked, “can I have a wine you make here?” I was told, we make all our wines here as I looked down the list of a dozen wines, seeing a grape that in no way can grow in the northeast. So I re-phrased my question and asked for something made with their own grapes. I was given a choice of two (two they were out of). They were very good, but ask specifically. CT is the only New England state with more than one AVA (they have two) and there are over 30 wineries there.

By the way, the East Regional is at the Mecca of Basketball (that is a general basketball reference, not a Knicks specific reference), the World’s Most Famous Indoor Sports Arena –Madison Square Garden. It is however not a Mecca of Wine Meets Basketball because when I was there most recently, the choice of wine at the food stand was Woodbridge cabernet is a small plastic bottle. Iowa had five vineyards in 2000. Today they have 310, and the state ranks 14th in number of wineries. Because of the climate the focus is largely on native American and French hybrid grape varieties. Here is one thing I think is very cool about the wine scene in Iowa (and other Midwest states)…a number of wineries are being started by farmers who believe growing grapes is a better economic and environmental decision than growing corn and soy. Good for them. Advantage: Iowa St.

Virginia vs. Michigan State. Michigan is a large producer of wine, with over 120 wineries and four AVAs.  Initially, much of it was sweet wine as Concord grapes were widely planted after Prohibition by the Welch Grape Company.  The state is also a major producer of cherries, and by extension, cherry wine.  Wine-related tourism is an over $100 million industry in the state and they hope to be producing ten times more wine in the next ten years than it does now, but vinifera grapes are a challenge because of the weather. The industry in Michigan is supported by an agricultural research program at Michigan State University, which began experimental vineyards around the state in 1970 and established a winery on campus in 1972. Are there good wines being made in Michigan? Ive seen them on wine lists at Danny Meyer restaurants, so what do you think?

Virginia basketball is the real deal this year, even if they weren’t on a lot of people’s radars. Virginia wine is similarly the real deal. Visiting UVA last year, I detoured one morning into the hills a short drive from campus and had some really good wine combined with a sense of the history of wine (and our county itself). Thomas Jefferson is known as the country’s first wine geek, and you can visit Jefferson Vineyards right next to Monticello, but wine was already being produced in Virginia since the early days of colonization in the early 1600s. Over 230 wineries, 75% of the grapes grown (and it is the fifth largest grape producing state, a regional top seed, if you will) are vinifera. I brought back a mixed case from Virginia and did not find a dog in the bunch. There is only one strike against Virginia wine as far as I’m concerned…Donald Trump owns a winery there. Advantage: Virginia

Tennessee vs. Michigan.  Refer to my Michigan wine notes above, but let’s focus on the wine industry in Tennessee. This is another state where Prohibition all but crushed the industry, except in Tennessee, grapes were seen as a potentially top cash crop at the beginning of the last century because they could be grown in terrain not suitable for most other farming. Even though Clarksville is best known as the train stop in a Monkees’ song, it is where the Tennessee Viticultural and Oenological Society was founded in 1973, and works to this day in conjunction with the state winegrowers association. There are less than 50 wineries though in the state at this time. Advantage: Michigan

Kentucky vs. Louisville. Although known for bourbon, Kentucky is the sight of the first commercial winery in the United States.  The Marquis de Lafayette’s winemaker, Jean Jacques Dufour, looked for land to grow grapes, and settled near Lexington, the “Athens of the West”.  Dufour, with the help of backing from a group that included Henry Clay, made his first wines by 1803 at what he called “The First Vineyard”.  At one time, Kentucky produced over half the grapes and wine in the United States, and by the late 1800s, was still ranked third in the country.  Then with Prohibition approaching, many turned to tobacco.  Today, there are over sixty wineries, and since the 1980s, many tobacco farms have switched to grape production…”Cigs to Swigs” is not the motto however.

So how do I choose a team here since both are from the same state? I could use personal feelings as my guide, because I do not dislike any coach in college basketball as I do Jon Calipari. Not that Rick Pitino would be too many circles away from him in Dante’s Hell. But UK alum Tayshaun Prince partnered with Elk Creek, the state’s largest winery, and released 21,000 limited-edition bottles of its best-selling Kentucky Blue Riesling for $21 per bottle in honor of Prince’s uniform number at UK, with some proceeds going to raise awareness of better eating and childhood obesity in the state. I begrudgingly have to give the nod to the Wildcats. Besides, maybe Ashley Judd will be at the game rooting for UK. That’s always nice to see. Advantage: Kentucky

There you have it, another unscientific, somewhat historical Sweet Sixteen analysis. Here’s hoping the games and the wine you open this weekend are all at least good and approaching memorable.