googlecfdf2a75256b68d7.html Notes from the First (of Many?) Grapes Unwrapped-Able Baker Pairing Things

Notes from the First (of Many?) Grapes Unwrapped-Able Baker Pairing Things

if you weren't there, you missed a fun night 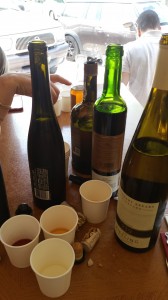 I try not to repeat myself, unless its a really good joke that I will beat until its all used up. I sat down to plan three seatings for a wine and dessert pairing presentation with Ellen Gray and Julie Johnson Pauly of The Able Baker and although we tasted a handful of wines to go with the three desserts, I thought it might be fun to do a different flight of four wines for the different groups. Fun, and a bit of free market research/experimentation for me. I billed the night as “really good desserts paired with reasonably good wine and especially good discourse”. I got this feedback this morning: “The desserts WERE really good, the better than ‘reasonable’ excellently paired and the discourse, by the third seating, was fast paced and hilarious! And yes, we were paying attention so please post your selections…great job!”.

So here goes…below I will list the wines with the paired dessert and some comments. The list of wines is not definitive in any way…there are other wines that could have probably paired well but I didnt happen to have them in my cellar or they weren’t available when I went out to get them. There were some wines that I did pair with different desserts and certainly some that I had but didnt pair that would have worked too. Its not a science or an art…pairing is for fun and the goal is to maximize and enhance the taste of both. But based on the sugar and alcohol-infused feedback I got last night and today, I was pretty on target.
1. Warm Blueberry Cobbler. Topping had some spice; fruit mixture had orange zest which added a little more dimension (more warm citrus accent than a bright citrus accent that lemon would have provided); blueberries are not inherently sweet, and can be a bit spicy and savory too. A top notch artisanal bakery isnt using Comstock…they are using fresh fruit and their desserts aren’t cloying or even terribly sweet like commercially mass produced versions.

One group got to taste the difference between semi-dry and dry riesling with the cobbler. Its fair to say they also got to taste riesling in general, and overwhelming, many came away with a new found understanding and interest. I think either riesling worked well…the dry picked up more of the citrus, the semi-dry more of the blueberry…both had the right mouthfeel for a dessert, which is what riesling provides and why its a very versatile food wine. Neither riesling was late harvest/dessert wine, but they both worked because they had excellent acidity and also big dollops of fruit, and to many, fruit replicates sweetness. The combination held up really well to the cobbler. And Riesling made a surprise impression in another dessert too.
The berry juice-laced mead was also a surprise to some, not just in that it is made commercially within minutes of where we were sitting, which is not in the middle of wine country. The mead has a mixture of five different types of berries but when we tasted it, the blueberries definitely came through prominently. Now if I am drinking a screwdriver, I dont use orange vodka to intensity the orangeness. The berry taste was distinct but not overwhelming, a backdrop to the mead, so when paired with the dessert, it complemented, it didnt taste like unnecessary layering.

2. Key Lime Pie with Toasted Almond Graham Cracker Crust. Key lime pie was made with real key lime juice, which isnt as tart as regular old lime juice, but it is still more citrusy and acidic than anything else on the dessert roster. The almond graham cracker crust adds a nice counterpoint to the citrus. There is a creaminess to this dessert too which I factor in. Basically, when pairing wine with dessert or anything, you have to consider the entire dish, and all the components first. If you decide then to key in on one main component, thats fine, but take them all into account. With dessert pairing, you also have to at least match the sweetness or the thought of sweetness (which we did with the fruit in the riesling with the cobbler) or the wine’s taste will be lost. Again, we want to try to enhance both, bring out the most in both the food and the wine.

The sparkling muscats provided a contrast similar to the rieslings…the Spanish muscat was drier, the moscato definitely had more residual sugar and a more distinct stone fruit character. Both had enough enough fizz though to cut through the creaminess of the pie, but I think the moscato was more “citrusy”. Some preferred one to the other, although I would like to try the moscato with the cobbler some time. Blueberries and stone fruit make a good combination, and I think those characteristics would have provided a nice contrast.

My personal favorite of the night though was the Tokaji with the key lime pie. A beautiful all by itself dessert in a glass type of wine, it had a gorgeous mouthfeel and even bright citrus tone that worked with the key lime tart in both flavor/acidity and in body. A late harvest wine, it had remarkable acidity and a long long finish, which also worked with the pie. The biggest surprise of the night though, at least to me, was the popularity of the dry riesling with the key lime pie. Again, it was fruit matching fruit, not sweetness and it worked really well for a lot of those in attendance. I want to emphasize the “for a lot of those”. Not everything works for everyone…that is personal taste. I do think there was consensus on another point I tried to get across. A wine can taste very different once you introduce the specific food, and that it may be as ernjoyable or in some cases more enjoyable as a pairing. All the wines poured are considered very good wines, some even highly rated, but that doesnt guarantee you will enjoy them or mean you have to. But my focus was on pairings more than the individual wine, and I think everyone got a good sense of the interplay.

You can also go two ways with pairing…complement or contrast. Two of the wines with the chocolate tart definitely complemented, two definitely contrasted. First, the complements. Banyuls is a wine that is considered by many to be the best wine for pairing with most things chocolate. It has some sweetness, but its a dry sweetness, not a lingering sticky sweetness, and coming in at 15% alcohol, its “lighter” than many California reds. To better explain what it is, I refer to it as a baby Port although not as thick and high in alcohol, but a lighter wine giving many of the same tastes which complemented this dessert well. But the wine that most people had the worst impression of going in, the cream sherry (thanks to all those cheesy 1970s commercials) was one of the more popular pairings. Tastes of dried fruit, cocoa, coffee, toffee, nuts went right along with the tart, but the sherry also had a lingering acidic vibrancy too. One of the better pairings of the night to me.

The contrasting wines…two of my personal favorite chocolate pairings too…an orange muscat and a Brachetto. Orange muscat is not a wine with orange flavoring, but a grape that when vinified takes on orange-citrus and apricot flavors. I love the combination contrast of orange with chocolate and it seems others do because I see it more and more in chocolate preparations of all kinds, not just baked goods. Brachetto is as I describe is like a red moscato…low fizz, low alcohol, strawberries in a glass. When the last of the wine has been served and after speaking for two and a half hours, it was a refreshing glass of wine…and I liked how it went with the last piece of chocolate tart standing.

Wines Poured: Domaine de Valcros Banyuls, France; Lustau Cream Sherry, Spain; Alasia Brachetto, Italy; Essencia Orange Muscat, California.
Thank you again to everyone who sat in or who wanted to sit in or who is re-living the evening through reading this or living it vicariously. Let’s do it again. Cheers!