googlecfdf2a75256b68d7.html a Bordeaux primer inspired by the British Open 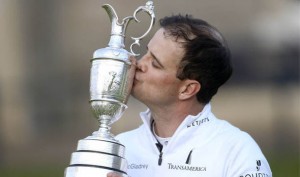 Congratulations to American Zach Johnson on his victory this week in the Open Championship, also referred to as the British Open. His gutty victory earned him a $1.8 million purse (not an actual purse) and the famed Claret Jug (an actual jug), the oldest and most coveted piece of hardware in golf.

From 1860 to 1870, the winner of the Open would get a snappy looking championship belt made of fine Morroccan leather and silver, more tasteful than WWE championship belts but they decided to commission a silver claret jug, first issued in 1873 to the 1872 winner. The winners name was inscribed annually onto the cup. The original cup was replaced and put on display at St. Andrew’s in 1928, and the current cup keeps having silver bases added to it to continue the tradition of the name inscriptions. The winner gets to keep the cup for one year, and then is given a replica.

But wait. What is a claret jug? It is probably best to define what a claret is first. A claret is a largely British used term to describe red wines from Bordeaux. It came from the French word “clairet” meaning a deep rose color, as the wines widely consumed in England from the 12th century through the 18th century were more akin to a fuller bodied rose today. Claret is a word recognized and accepted by the EU since the Anglicized version of “clairet” has now been in use for centuries. Here in the US, it is a term that appears on labels occasionally to mean a Bordeaux style red blend, but the word “meritage” is more commonly seen here, although “red blend” seems to have become even more popular. The word claret has only been used by the French for export purposes although there seems to be a movement to use it in its most original form — to describe a light, fruity, easy to drink rose as opposed to the dry fuller bodied red the word (and style) morphed into.

So those of you who have read about or attended my “Wines of Downton Abbey” presentations know that the Granthams, like most upperclass Brits, heavily favored “clarets” and you all may remember what comprises a claret. For you non PBS/BBS folks, Bordeaux is the largest wine producing region of France, almost 300,000 acres producing over 450 million bottles a year. Not all that wine is highly classified, highly sought after. Over 80% is considered table wine, but 89% of the total production is red wine, or claret.

The permitted red wine grapes of Bordeaux are merlot, cabernet sauvignon, cabernet franc, malbec, petit verdot and carmenere. Why in that order? 62% of the red grape vines planted are merlot, 25% cabernet sauvignon, 12% cabernet franc and the remaining 1% dedicated to the other three grapes, used mainly for blending, with carmenere practically extinct from the region. There are important rivers that cut through Bordeaux. The main river is the Gironde, and feeding into it are the Dordogne and Garonne, forming something akin to an upside down Y. The Left Bank, the area to the south of the Garonne and Gironde, is where cabernet sauvignon is king. It is where the top growth and classified wineries are, and it is significantly smaller than the Right Bank. Not that the Right Bank, the area north of the Dordogne and Gironde is without quality. Some highly sought after wines come from this area, which is merlot dominated and a much larger region, which accounts for the above percentages of grapes.

Here is a little cheat sheet for you to keep your banks straight.

Left Bank: The city of Bordeaux, the second most visited city in France behind Paris, is in the Left Bank area. On the left bank of the Garonne, close to the Atlantic coast. It is split between Medoc (home to significant appellations Margaux, St. Julien, Pauillac, St Estephe, Listrac and Haut Medoc) and Graves, the birthplace of claret (with Pessac Leognan and Graves being significant appellations along with Sauternes and Barsac, although not significant for red wines but for their defining dessert wines).

Right Bank: On the right bank of the Dordogne, around the city of Libourne. Pomerol and St. Emilion are most significant appellations, but there is much quality (and value) in Cotes de Castillon, Cotes de Francs, Fronsac, Canon Fronsac, Lalande de Pomerol.

Now, back to the jug. Claret jugs were all the rage from around 1830 to 1920, and today are very collectable. As their popularity grew, so did the artisanship in making them. Why did they become popular? Up through the 18th century, wines were purchased and stored in better homes in casks, and what was served was poured off into the serving vessel of choice prior to dinner. In the early 19th century, with improvements in manufacturing, glass bottles were made more uniformly and used more and more often at the source of production. As the use and storage became easier, and more widespread as the consumer class grew, so did the demand for wine gadgets, toys and other accoutrement of the day. Its not unlike today’s explosion of wine related paraphenelia as consumption of wine here in the US has grown to the greatest in the world. Early claret jugs were all silver, then some combination of handcrafted silver and glass. Shapes and design became more ornate over time too. Fashions change though and crystal and cut glass became more popular towards the end of the 1800s, and then World War I came along, changing first the extent of manufacturing of finery such as claret jugs and then eventually, the use of them. 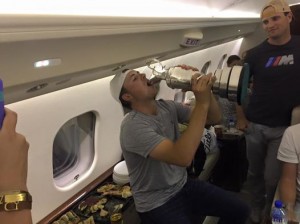 The Claret Jug though presented this week to Zach Johnson has endured. And the jug does get used. Johnson said he will use it to replace his kids’ sippy cups (possibly only half joking) and there were pictures floating around of he and fellow golfers drinking what was only termed “adult beverages” from the jug on their way home from the tournament. Similar to the Stanley Cup, winners have been known to drink “adult beverages” from the Claret Jug. After Phil Mickelson won the Open Championship, he said with a laugh, “One of the things that I stressed is that we have to treat the Claret Jug with reverence and respect that it deserves and only put good stuff in it.” The story has it that one of his friends dumped a $40,000 bottle of 1990 Romanee-Conti into it for their celebration. Of course, although a remarkable red wine, it is a Burgundy, and not a claret, but you know that now.