I do have a bigger interest than wine, and that would be music.  Today is the birthday of Bob Marley, a man not known for his wine intake, but Marley was quoted as saying that drinking wine on occasion was fine, but that spirits were bad for you.  Combing through my knowledge of his music, along with the help of the internet, there are so many references to Marley singing “Red Red Wine”, which all appear erroneous to me.  The song was originally written and performed by some guy named Neil Diamond, and was covered by a Jamaican reggae singer, Tony Tribe, in 1969.  When the best known version of the song, by UB40, was released in the ‘80s, the band said they thought they were covering Tony Tribe, and not Neil Diamond.

The UB40 version also added the toasted verse (think rap) of “red red wine you make me feel so fine, you keep me rocking all of the time”, and the mention of toasting brings me back to the topic of wine. It made me wonder, what wine goes best with herb, I mean, herbs.  When I think herbaceous, I think sauvignon blanc, both in flavor profile and in food pairing.  And if I’m eating ackee and saltfish, a national dish of Jamaica, I think a sauvignon blanc will go nicely with it, especially if I don’t have a Red Stripe or soursop juice handy.  A semillon or a sauvignon blanc/semillon blend (such as many white Bordeaux) also would work…and semillon/sensimilla…hmm.  Not sure I can experiment with that pairing…a nuh mi fi like it, mon.

But what about red red wines?  There is an herbal character in some California reds, especially a dried mint and eucalyptus nose and flavor. But when I think herbs in red wines, I think garrigues, the low wild shrubby herbs (including rosemary, lavender and thyme) that often grow near or alongside the vines in parts of the southern Rhone (especially Provence) and the Languedoc, often imparting some additional character and garrigues is a term used to describe herby scents in those wines.

By the way, the only wine reference I could dig up in any Bob Marley song was from “Easy Skankin’” where Marley sings, “tell you what: herb for my wine, honey for my strong drink”, so it seemed like a pairing he approved of.  As always, my approach to wine is social…it is about sharing positive vibrations, so I hope someday we can say, let’s get together, and feel alright. 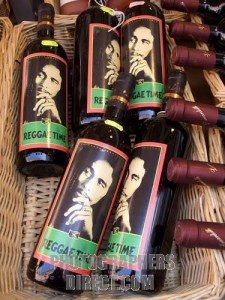 lets get together and feel alright