googlecfdf2a75256b68d7.html News Flash: Man Bites Shark…Pairs It With Something Delicious

News Flash: Man Bites Shark…Pairs It With Something Delicious

A toast and tribute to "Shark Week" 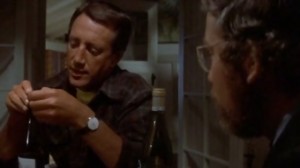 “Jaws” still scares the crap out of me.  At this point, I know what’s coming, I know when it’s coming, but I still jump part of the way out of my chair.  Oh no, I’m not talking about the gory shark attack scenes…I mean the wine scene!  What wine scene you ask?  Hooper comes to visit the Brody family and brings along two bottles of wine, a red and a white.  The red is a Barton & Guestier Beaujolais I believe, and in an incredibly horrific scene that gives me chills just typing this, Martin Brody (so well played by Columbia High School Hall of Famer Roy Scheider) opens the bottle, pours himself a large glass full, and they all proceed to drink it!  By the way, next time you watch the movie, look for the wine level in the bottle that seems to rise and fall, not in concert with the wine being consumed in the scene.

OK, in all fairness to Barton & Guestier, at the time of the movie, it was a nice wine to bring to someone’s home (although most folks didn’t have much wine savvy back then…and more prominently consumed in the movie and discussed is Naragansett beer).  B&G is the oldest wine merchant established in Bordeaux in the early 1700s and produces wines from all over France.  It is a winery rich in history, with the founder Thomas Barton being one of the “wine geese” who fled Ireland for France and got ensconced in the wine shipping trade, then ultimately production, significant at the time since Ireland was one of the largest importers of wine. Check my blog from around St. Patricks Day for more on the “wine geese”.  In any event, in most of our adult lifetimes, B&G wine declined in price and quality to be no better than passable table wine.  In recent years, they have refocused their energies, and despite not raising their prices, have tried to make better wines.  A recent Cotes du Rhone release got a Wine Spectator top value nod.

But anyway, that leads to my discussion of a growing cultural phenomenon. Not Discovery Channel’s “Shark Week” specifically, but me writing about wine pairings whenever some significant and growing cultural phenomenon rolls around.  My armchair psychology says to get over a fear, it is best to confront it and meet it head on, so despite lingering “Jaws” related nightmares, I think it is time to turn the tables and not only have man bite shark, but revel in it with the right wine accompaniment.

I will admit, I am not an expert in many different types of shark, and I will assume taste varies, but I have eaten and prepared mako shark.  Of the hundreds of shark species, mako is one of the best tasting, often confused for or used as a substitute for swordfish.  A quick way to tell the difference is by touching the skin; mako skin is sandpapery, while swordfish skin is smooth.  Another thing to keep in mind: buy shark from a reputable fish purveyor.  Like all sharks, mako carry urea in their bloodstream and if not handled properly, that urea will turn into ammonia, so if you smell ammonia on shark meat, it is ammonia.

You will find a reputable source for your shark meat and then you will figure out how to prepare it.  As I said in my seafood wine pairing episode of “The Grapes Unwrapped”, when it comes to pairing wines, consider the whole dish, not just the fish.  How it’s prepared and what it is served along will be important in choosing your wine.  Or it won’t be, because as I always say, this is not rocket science and should not be something intense or over the top, but for fun, and as a way to maximize the taste of your meal, but the most important part of the meal is usually who you are sharing it with.  But, lets look at some popular shark preparations and come up with some wine ideas.

Mako shark is a dense meat, not quite as sweet as swordfish but moister so a bit more forgiving when cooking.  It is disappointing to get an expensive piece of fish and overcook it, but you will have a little more wiggle room with mako than swordfish.  Because it has some nice body to it, mako can be grilled or roasted, it can be cut up and used in soups and stews or skewered on kabobs and it holds up well to marinating. That range of preparations means there are a range of wine possibilities.

Thinking grilled marinated kabobs over rice with a mango salsa?  Id go with a rich white, like a pinot gris or a gewürztraminer, maybe a riesling…nothing too light, but also nothing with oak.  A soup or stew preparation gets a sauvignon blanc or a rose.  One very popular way to prepare shark is as a steak au poivre.  The thicker cut of fish and the pepper crust can get either a gruner veltliner which holds up nicely with pepper, or you can go red.  A not too high in alcohol syrah or shiraz would go nicely…remember, you don’t always pair by flavor but by weight of the food with the weight of the wine.  The firmer, heavier fish can stand a firmer, heavier wine, but remember, its still fish.  You might want to save the California cabernet for another night.

My favorite preparation brings me Mediterranean.  Ive always loved a livornese sauce for fish, and in sync with my Tuscan friends, I would gladly pair a medium bodied Chianti or other sangiovese based wine with it, matching the acidity in the sauce with the acidity in the wine.  But I did an event last summer where I paired a grilled swordfish preparation with a sauce of tomato, olives, capers and herbs with a Sicilian wine, a nero d’avolo.  Without the tomatoes, I may have gone with a sauvignon blanc or a zippy vermentino, but the tomato combined with the smoke from the grilling made the red wine again a great combination.  As swordfish shares so many characteristics with mako, Id use the same pairing with that preparation.  In fact, the next time I can get a nice piece of mako, that is exactly what I will do.

Now, bring on “Jaws”, but first, I think we’re going to need a bigger wine rack.