With special bonus wine scene adaptation from the book! 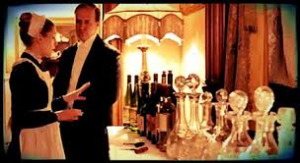 I offered to do a fundraising wine event for a local (incredibly worthy) not for profit in my community, The HK Project, and wanted to come up with a theme for the tasting that touched upon popular culture…and two icons of popular culture recently where wine has had a presence have been “Downton Abbey” and the Fifty Shades of Grey books.  How much of a presence?  Well, this autumn, a line of Downton Abbey wines will be released and Fifty Shades author EL James has a page on her website outlining all wine references in all three books.  Some of those mentions are simply “white wine” or “prosecco” and some are a specific wine from specific producers.  Based on the sheer number of sales of the books, I would think those wineries saw some bump up in sales.  And although I did not include it in this tasting event, another recent pop culture icon, Mad Men, started showing wine being consumed in most episodes this season.  Why? Its 1968 and wine is starting to show up on certain dinner tables and at parties in the United States.

In Downton, there are a few wine references to know that will make you understand what was in those expensive and almost always properly chosen crystal wine glasses (some of you may remember Carson getting in a snit over the pudding wine glasses in one episode).  They were not drinking their wine out of the equivalent of Flintstones jelly jars, that’s for sure.

Wine references abound in the Fifty Shades series. Often the references are simply “white wine” or “Sancerre” with no specific wine mentioned.  Then there is the recurring mention of the 1999Bollinger Grand Annee Rose.  What struck me as unusual though was that the story takes place in one of the premier wine producing regions of the United States – Washington – and there is no mention of Washington state wines.  Another thing I find curious is pinot grigio playing a central role of sorts in one segment.  I thought maybe pinot grigio was used since “grigio” means grey, but I don’t think it had anything to do with any theme.  And as you will see in my following adaptation of that scene, I do take exception to it’s use.

Not for food, I say to myself.  “Not particularly”.

“You must eat, Anastasia”, he chides.  I know a great place near Olympia. We’ll stop there.

The restaurant is small and intimate, a wooden chalet in the middle of the forest.  (Editor’s Note: Haven’t we learned from countless readings of children’s book that you don’t go into some place in the middle of the forest!?)  The décor is rustic: random chairs and tables with gingham tablecloths, wild flowers in little vases.  Cuisine Savauge it boasts above the door.

“I’ve not been here for a while.  We don’t get a choice — they cook whatever they’ve caught and gathered.”  He raises his eyebrows in mock horror, and I have to laugh.  The waitress comes to take our drink order.  She flushes when she sees Christian, avoiding eye contact with him.  I think to myself, “She likes him! Its not just me!”

I purse my lips, exasperated.

“I wanted a Diet Coke”, I whisper.

His grey eyes narrow and he shakes his head. “The pinot grigio here is a decent wine.  It will go well with the meal, whatever we get”, he says patiently.

He smiles his ‘dazzling head cocked to one side’ smile, and my stomach pole vaults over my spleen.  I can’t help but reflect his glorious smile back at him.  The waitress arrives with our glasses of wine and I immediately take a quick sip.  She then brings us soup.  We both stare at it dubiously.

“Nettle soup”, the waitress informs us before turning and flouncing back into the kitchen.  I take a tentative taste…its delicious.  Christian and I look up at each other at the same time with relief.  I giggle and he cocks his head to one side.

“That’s a lovely sound” he murmurs…”not the giggle, the way you slurp your soup”.  (Yet Another Editor’s Note: at this point, I took the liberty to edit out the part when Christian talks of Mrs. Robinson and how she seduced and trained him…Mrs. Robinson, really?  The author couldn’t pick any other of a million or so last names for the older female seductress? Even Robertson would have been better)

The waitress soon returns with venison, but my appetite has vanished.  What a revelation he just shared with me!  I take a large slug of the pinot grigio…he’s right of course, it’s delicious.  He’s so overwhelming, so alpha male… then he drops this bombshell on me. “I’m really not hungry, Christian” comes from my mouth but what I want to say is…I am reeling from your disclosure.

“Eat”, he says quietly, too quietly.

Reaching for my knife and fork, I tentatively cut into the venison. It’s very tasty.  I then tentatively reach for the pinot grigio.  He senses my hesitation.

“Drink. I am sensing your hesitation” he says less quietly.

“Well Christian, I am afraid to say this”.

“It is OK.  You haven’t signed any contract yet.  Now is the time to feel free to say something”.

“Yes you do…you don’t even know how much you want it, but I can sense it”.

“It’s a big step”, I murmur and I slice another piece of venison, holding it against my mouth, wanting to say something.

“It is.  Anastasia, you have to go with your gut. Do the research.  Read the contract.  I’m happy to discuss any aspect. I really want to make this work.  In fact, I’ve never wanted anything as much as I want this to work”.

“I told you, you have to trust me and just let go…submit to me”.

“Yeah I know, but I’ve been to Hank Zona’s wine events and read his blog and watch his show.  He is right!  Pinot grigio will go great with whatever we order?  With venison?!?!  Are you kidding me?! I’m sorry dude, you play up this ‘man of exquisite taste’ demeanor, but we live in the Pacific Northwest where the food and wine rock.  Trying to convince me that this is a great pairing only leads me to believe that you are a poser.  If this is what you know about wine, I’m afraid to find out what you know about sex.  ‘Laters baby’, indeed.”