googlecfdf2a75256b68d7.html For Festivus, My Airing of Wine-Related Grievances

For Festivus, My Airing of Wine-Related Grievances

rather than the feats of strength portion of the holiday 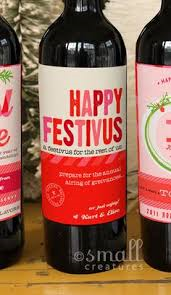 I don’t actually celebrate Festivus, but this concept of the airing of grievances caught my attention. I don’t think its a free pass to rag on people…besides, who needs just a specific day of the year to do that? And although my occasional (daily?) use of social media has given me an arm’s length of grievances I could air (and I have long arms), this list is specifically focused on my wine themed airing out. And since I first wrote this three years ago, I felt the need to update/add to my grievances! So here goes…

My Wine Themed Airing of Grievances, or Who Disappointed Me.

1. Restaurants. Don’t phone it in with your wine list (and some of you literally just phone in your orders with wholesalers). Don’t fill your by the glass list with the same stuff every chain restaurant is offering by the glass. Don’t carry a wine by the glass that someone can buy easily by the bottle for less money at the wine store across the street than they can buy it by the glass at your place. Invest in staff training of some kind…the more they sell, the better you do and they do, and that is tied into how well they can talk wine (and food). Don’t become beholden to the behemoth distributors. I am not saying don’t work with them…I know some great folks working for them who are very knowledgeable and passionate and there are excellent options in their portfolios too. You most likely are a small business and not a large, many sited enterprise…leave some room at the table for the wineries and wholesalers who are similar to you. But if your business model is to not do anything I suggested, don’t be upset when you don’t see me in your establishment or that I wonder where else you are cutting corners on effort and quality.

2. Retailers. Don’t put up outdated shelf tags that tell about the monster rating of the wine on the shelf, three vintages ago. Don’t send me emails that in essence are telling me I am stupid not to buy something, and don’t tell me something is the wine of year if you have already done so numerous times during the year. Don’t tell me you have a limited release then tell me again in an email weeks later you have the same limited release, and then when I show up in the store to pick up my order, I see cases and cases of it. Don’t pan off a private label wine as something that isn’t. Private label wines can be a great value…you don’t have to be misleading about it. As with the suggestion I made to the restaurants above, invest in staff training, don’t become beholden to the behemoths and make room for the little guys. Give your customers something more than convenience. Don’t act as if you are the most knowledgeable person in the world. You aren’t. And with people’s phones never too far from their hands, it’s easy for anyone to get more wine info immediately…and people are more knowledgeable in general walking in the door than they were many years ago. And consumers with phones…more on that later. To retailers and restaurants — I understand.

3. Collectors. I find there is a distinct difference between enthusiasm and snobbery. Keep your wine snobbery to yourself. Keep your wine geekery with other wine geeks. I love sports and I love to talk sports but don’t talk sports ad nauseum with people who aren’t interested in sports…know the interest level of the folks you are with. Enjoy the wine you have. Some of you simply collect and don’t derive nearly as much pleasure from drinking the wine as you do from saying you have it in your portfolio, I mean in your custom wine room.

4. Wine Producers. Marketing is a part of business, and it interests me professionally and personally and captures my attention, but make a product with more effort and passion than it took to create the label and ad campaign.

5. Consumers. Don’t fall prey to marketing. Try different things…there is a great big world of wine out there with lots of choices and varieties so be open minded. At the same time, don’t like something because you think you are supposed to. Like it because it is likable, and because it makes you happy to drink it. Beware of stores and restaurants that are coasting on past glory (or even past ownership). Business focuses and quality do not necessarily stay consistent. I hear many in my area talk about how great a once great establishment still is when the greatest thing about it is its past reputation.

Drink better wine. Better wine is not necessarily more expensive wine. There is almost assuredly better wine at any price point if you look around a bit. You don’t have to drink food processed wines (and the mass produced stuff isn’t necessarily the least expensive). Unless of course you eat Wonder Bread, then by all means, be consistent. Stop to consider what you are drinking. We spend more time these days considering the food we put in our mouths but not so much the beverages. And while you are consuming, take a moment to slow down and enjoy it and consider how the wine actually tastes and how the food actually tastes and how they go together. No, its not a drawn out process…it’s just a moment to enjoy and process it. We’re lucky to have the access to the quality of food and wine and other beverages we have daily. Ultimately, don’t settle and don’t be intimated. If you like something, that’s the most important thing. But you don’t have to like the same wine everyone else in your social circle like just because they do…I mean, you wouldn’t show up at a party with the same style boots as everyone else just because they were in, would you?

6. The Younger, New Wave of Wine Enthusiasts. Hi, I like that many of you who work in some aspect of the industry have brought a new energy to the business, but many of you have attitudes that are worse than the old guard attitudes you eschew. Having the attitude many of you have is just another form of exclusive behavior and snobbery. Check your egos at the cellar or tasting room door, please.

7. Some Users of Wine Apps (my new category!). I did a tasting, poured a wine for a group of six guys, they all remarked that they liked it a lot, and they all immediately pulled out their phones to use their fully loaded wine apps. So I asked them why they wanted to use it. One guy said he wanted to see the rating. Another wanted to see the price. One wanted to take a picture and categorize it (the best reason of all I think). I asked if they all liked it. They all did. So I asked the guy who said he wanted to see the rating if he needed to support liking it…as if by seeing a number on his screen, he might instantly dislike the phone. They all laughed but got my point (although Im sure they didnt change their reason for using the app). The wines for the tasting were available for purchase and they all knew that. I told the person who wanted to know the price that I too used the internet and the six wines being poured were not available at one place within an hour’s drive, and no store I knew had more than any one of them, if any of them, and I priced them to no more than the lowest price I could find.

I had one local small shop retailer tell me people walk in often, check his prices and then walk out (his prices are not the lowest because of size but competitive and he is convenient). He has given personal attention and info and time to people who then have walked out to go drive 15-20 to save $3 a bottle from a retailer with no floor support. I dont know about you, but I think thats an asshole move.

Consider the validity of the info you are using. At an event recently, someone said that one wine I poured was less expensive elsewhere according to her phone. I asked to look and it was an internet only site that gave a below best wholesale price and in small print, available in five business days. So I told her they didn’t have the wine. She said she would wait the five days for the better price, but she didn’t understand that it wouldn’t be the same wine or same price they had on the site. She called me back three days later to order the wine from me. Look, not all apps or websites or internet info is wrong…much of it is amazingly helpful. But you still have to consider the source or look closer. Some scores can be an average over multiple vintages. Some prices can vary wildly.

8. Wholesalers (another new category!). Give your sales force a fighting chance to make a living. Don’t overload a territory. When you have multiple reps handling multiple accounts within walking distance of one another, you aren’t helping them and you aren’t helping consumers when the same wines show up within walking distance of one another. As much as I may love your portfolio, I am loyal to the people who have always been good to me, so when they leave for a better deal with another wholesaler, I will always try first to find wines in their new portfolios. I don’t buy a high volume, but in one instance, I was the #2 account in NJ for a specific wine that moved from one wholesaler to another (85 cases in one year). The new wholesaler was not properly staffed and I attempted a few times to get them in to establish a new relationship. Remarkably, the salesperson lived five minutes from the account. Four months later, after only once being given a Thursday morning at 7 or a Friday evening at 7 to meet (how many of you meet with a new account at 7am on a weekday morning?), we haven’t seen them and I found a wine to replace it finally.

Phew…I feel better now (and no, I’m not a cranky person…I air in a civil manner, even with those guys using the apps). Now I am off to the gym where I most likely will fail miserably at the “feats of strength” portion of the Festivus festivities.