googlecfdf2a75256b68d7.html I Tried White Zinfandel (Not THAT Kind of White Zin)….And Liked It

I Tried White Zinfandel (Not THAT Kind of White Zin)….And Liked It 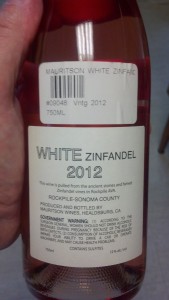 I’m a generally positive guy…except for my lapses into sarcasm. I am very careful not to really slam wines I don’t like, with some exceptions, but those of you who follow me are familiar with some of my riffs on those exceptions. One I have gotten a lot of mileage (and a few laughs) out of is the topic of white zinfandel.

I have referred to it as the Harlequin romance novel of wine, and as the Celine Dion of wine.  I have said it would pair well with Twinkies but they have been off the market for some time now, although it seems they will be resurrected in two weeks, for those who take all my pairing suggestions to heart. I disparage establishments that have it on their wine lists (unless they are primarily serving Twinkies). I have also given white zin its due in regards to the business success of its creation and its role in most likely saving zinfandel from disappearing from the California landscape.  I’ll even admit for some it’s a starter wine and launches them into exploration of other wines. But this week, I purposely bought and drank a white zinfandel, and I am admitting in writing for the world to see that I really liked it.  Let me explain.

I remember a handful of things from my college sociology class.  This isn’t about Maslow’s need hierarchy with wine somewhere near the top for me.  It’s not about intrinsic vs. extrinsic rewards, although wine is definitely an intrinsic thing for me.  Another term that has stuck with me all these years is cognitive dissonance, or the distressing feeling one has when their opinions or beliefs about something do not fit with their other or existing opinions or beliefs.  So, when I saw that some significant and serious zin producers were making white zinfandel, I may have experienced what can be described as oeno-cognitive dissonance.

White zinfandel wasn’t always sweet.  Sutter Home’s original white zinfandel was made in a dry style, but it was a fermentation faux pas in 1975 that created the sweet version, and instead of chucking it, they took a chance that many an American palate would go for it.  Today, that means over 8 million cases a year, or about a 7% U.S. market share by volume (behind chardonnay, cabernet, merlot and pinot grigio/gris)…or four times as much as red zinfandel.  But despite its popularity, whenever I use a rose at one of my wine events, people are often very hesitant, even resistant, assuming the color of the wine carries with it the CA white zin sweeter profile rather than the traditional Provencial, drier style, where 85% of all the wine made is rose.

A year or so ago, I tried a Jules Melange Vin Rose.  It included zinfandel but tasted as if it was primarily cabernet, so I figured I was safe from being labeled a hypocrite.  Then I saw that Turley, perhaps the cultiest of the cult zin producers, was making a white zinfandel at the suggestion of Christina Turley.  She wanted the family to make a drier style rose that would be fun to drink and appeal to the wine geek community.  Although I have yet to taste the Turley (I think that is about to be remedied), I also saw that Mauritson was also making a white zinfandel.

I have met Clay Mauritson a few times.  He is a charismatic, passionate winemaker, from a six generation grape growing family in the Dry Creek Valley in California, and for you Nick Lowe/Dave Edmunds fans, very specifically in the Rockpile AVA.  He makes big, beautiful wines, including “real zins”, and when I saw the white zinfandel, I wasn’t worried about the quality of the grapes used or the wine being made.  Truth be told, I didn’t experience all that much cognitive dissonance, if any at all…instead, I was pretty excited to open up the bottle and try it.  And sure enough, it is crisp and acidic with lots of good fruit…a wine that can accompany most summer food or that you can sip casually while sitting barefoot on your sun porch (the two scenarios this week in which I drank the wine).

I love roses…I try dozens of new ones every year, so it was great to have a really good expression of a rose in the style I prefer made with a grape I really like, and am happy to see well-used.  I will say it again — I tried a white zinfandel for the first time in the second half of my life to date, and it pleased me.  I’ll continue to pass on Celine and the bodice rippers.